Nero Wolfe is back! And this time, he'll have to infiltrate the posh art scene in order to solve the crime. When art collector Arthur Wordell falls from the 20th floor of his Times Square office building, his daughter Nadia thinks there's foul play. At the time of his death, the Guggenheim Museum was trying to convince Arthur to let them showcase his collection. Private investigator Nero Wolfe, along with his assistant Archie Goodwin, are on the case in this exciting new mystery.

Murder & Mayhem is giving away an advance reading copy of Death of an Art Collector to 20 lucky winners! Read the book before it comes out on May 14, 2019.

Enter your email address for a chance to win a copy of Death of an Art Collector.

By submitting your email address you agree to receive emails from Murder & Mayhem. 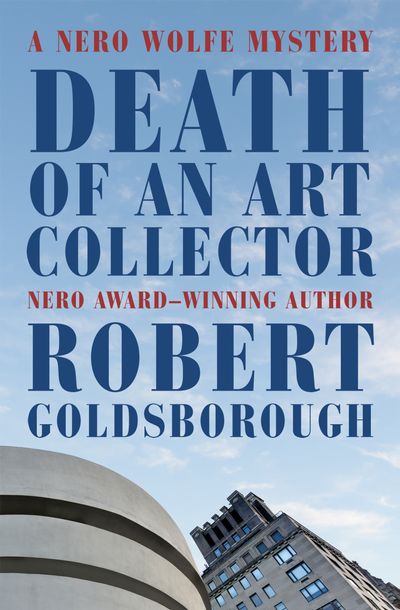 Death of an Art Collector

No matter how fabulously he’s being courted, infamously dour “art hog” Arthur Wordell isn’t keen on favoring the new Guggenheim Museum with his extensive collection. Even at the urging of his beloved daughter, Nadia. Then, the night after the museum’s fête, Arthur takes a twenty-story plunge from the window of his Times Square office. Nadia thinks it’s no mere coincidence.


Eccentric, yes. Suicidal, no. Private investigator Nero Wolfe and his assistant, Archie Goodwin, agree. Especially after eyeballing Arthur’s enemies and sycophants, including his ex-wife, a covetous curator, a troika of obsequious advisors, and an outré Greenwich Village artist anxious to see her work out of storage and on the walls of the “Guggie.”


For Wolfe, there’s a problem: Arthur didn’t leave a will. Without a beneficiary not a soul in Arthur’s circle is set to benefit from his death. Nor do they show any customary indication of guilt. If anybody can solve a seemingly unsolvable masterpiece of murder, it’s Wolfe. Unfortunately, this time, New York’s artful investigator is, admittedly, stumped.

Death of an Art Collector

Note: The sweepstakes is open to all legal residents of the 50 United States and Washington, DC who are 18 years of age and older by April 8, 2019.