My Cousin Vinny: The “Courtroom Drama” That Still Makes Us Laugh Over 25 Years Later

Lawrence Kelter's new book based on the movie adds to the film we know and love.

First released in 1992, My Cousin Vinny was a phenomenon. Starring Joe Pesci and Marisa Tomei, the movie begins with Billy Gambini and Stan Rothenstein—two college students on their way to UCLA. While driving through rural Alabama, a misunderstanding escalates and they are accused of murder. With nowhere else to turn, Billy calls his Uncle Vinny (Pesci)—a personal injury lawyer from Brooklyn who recently passed the bar and has absolutely no trial experience. With his fiancée Mona Lisa (Tomei) in tow, the pair travels to Alabama to defend Billy. What ensues will go down in comedy history, as Vinny successfully fumbles his way through the trial.

Praised by lawyers for its realistic depictions of both courtroom drama and legal procedure, My Cousin Vinny also caught critics attention—with Tomei even winning the Academy Award for Best Supporting Actress.

Over 25 years later, author Lawrence Kelter is bringing the film back into the spotlight with his novel based on Dale Launer’s screenplay of My Cousin Vinny. Author of bestselling mystery series, including the Stephanie Chalice thrillers, this isn’t Launer's first time writing Vinny and Mona Lisa: He also wrote a sequel to My Cousin Vinny called Back to Brooklyn last year.

This time around, he’s taking cues from Launer’s work, as well as adding his own voice to the original. We caught up with Kelter about why he wanted to revisit this story and so much more. 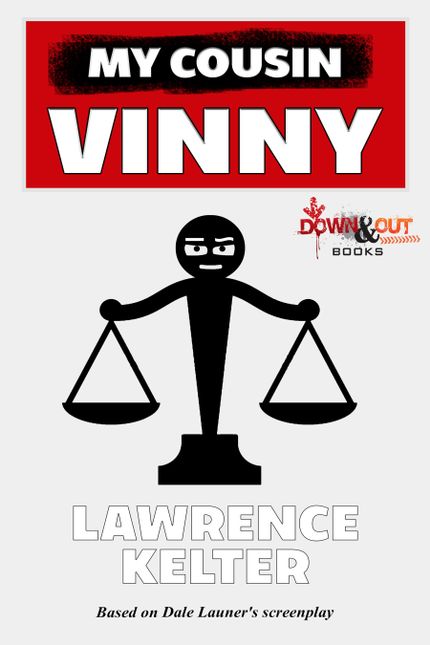 Murder & Mayhem: My Cousin Vinny has been a household name since it was released in 1992. What made you want to revisit it as a novel?

Lawrence Kelter: I have always loved this film. I’m originally from Brooklyn and grew up around high-spirited, fun loving, wisecracking guys and gals like Vinny and Lisa. The film really resonated with me. I remember walking out of the theater hysterical after seeing it the first time, already parroting lines that would soon become classics.

After laughing my ass off one day [years later] I decided the screenwriter deserved a little acknowledgement, so I looked up Dale Launer’s contact info and fired off a brief email, basically telling him that Vinny and Lisa still had me laughing out loud almost twenty-five years after its release. I thought I’d never hear back from him—after all, he was Hollywood, and I was not. But I did. One thing led to another—emails led to phone calls, and strangers became acquaintances. He said that he always wanted Vinny and Lisa to have more of a legacy. He saw them as a modern Nick and Nora Charles, with Lisa investigating and Vinny litigating. I pitched him on the idea of moving the characters forward in a series of novels. He was a bit reticent at first because he felt that Vinny’s and Lisa’s humor was very specific. He asked to read one of my books to gauge my comic sensibility. He called a few weeks later to say, “Hey, you’re funny.”

Vinny and Lisa’s banter is one of the highlights of the film—is this amplified in the book adaptation?

You know it is! Vinny and Lisa are always involved in a perpetual game of cat and mouse. They’re continually teasing and flirting but always doing so in a good-natured spirit. It’s a little known fact, but during the making of the film, the studio decided that Lisa’s role was not germane and suggested her role be cut. SERIOUSLY? By any stretch of the imagination, can you see My Cousin Vinny without Mona Lisa Vito? Marisa Tomei’s performance was awesome. The movie wouldn’t have been the same without her quips, barbs, and sixth sense savvy. Fortunately, Dale suggested he beef up her role and wrote the now famous “biological clock” scene in which Lisa stomps back and forth across the patio while ranting and raving about the lack of progress in their relationship. Dale nailed it, Lisa stayed, and the rest is history.

How will this book be different from the film?

For one thing, there’s no cutting room floor in literature. Yes, I did plenty of editing, but I took poetic license when I felt it important to do so. I had the luxury of adding prose where I thought it would add to the story’s overall enjoyment and extra dialogue where I though it might add a little extra pizazz. I had the benefit of working with the original shooting script. Many scenes, although great in their own regard were cut from the final version of the movie. The good ones were added back into the printed version. Then came the fun part—adding new original scenes to a movie the world loved, scenes that bridged some of the gaps I thought existed in the film, as well as adding nuances readers won’t expect.

You’ve written several mystery and thriller series—will you be incorporating more suspense into the book adaptation?

Yes and no. I did sneak in a few unexpected twists and turns—the elements that keep readers glued to the page—but My Cousin Vinny has more to do with the relationship between Vinny and Lisa, the stark contrast between the New Yorkers and their Alabama counterparts, and above all else, the laughs. My goal was to give the reader more of what they loved about the film.

This post is sponsored by Down & Out Books. Thank you for supporting our partners, who make it possible for Murder & Mayhem to continue publishing the mystery stories you love.

Featured still from "My Cousin Vinny" via Twentieth Century Fox