When a Young Girl Goes Missing, A Father Questions If His Son is Guilty of a Terrible Crime

Teenager Keith Moore was the last person to see Amy Giordano before she went missing in this Edgar Award-nominated thriller from Thomas H. Cook.

Eight-year-old Amy Giordano is missing. And the last person to see her was her babysitter: Keith Moore.

When Amy’s parents wake up to find that their daughter has vanished, panic ensues. The police begin questioning Keith about what exactly happened that night, and while Keith’s father, Eric, firmly stands by his own child’s innocence … he soon begins to question if Keith is telling the truth.

As the search continues for the missing girl, Eric continues to grapple with the fact that his son might be guilty of a horrific crime … and might strike again. In Thomas H. Cook’s psychological thriller, Red Leaves, readers will have to weigh the evidence and decide for themselves: Is Keith innocent…or guilty?

Read on for an excerpt of Red Leaves, and then download the book. 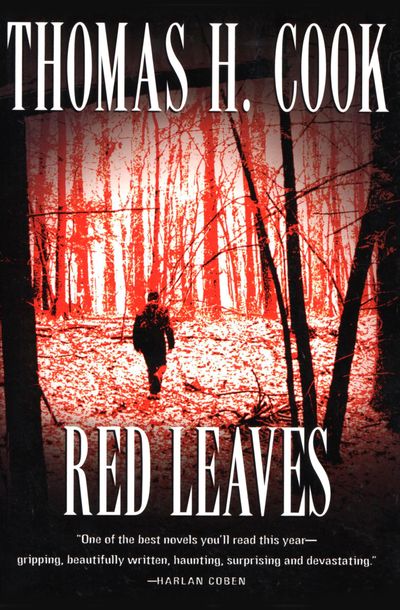 I expected to find Keith on Vernon Road, which fronts our house, then shoots directly to town, where it becomes Main Street, then winds another mile to the ball field, a distance of little more than three miles. But instead, I spotted him standing idly at the little playground near the town square, a place where people routinely bring small children to scrabble in the sandbox or race around the wooden castle. He was slumped against the playground’s wrought iron fence, his shoulder pressed into it, rhythmically kicking at the ground with the toe of his shoe.

He didn’t see me when I pulled up to the curb a few yards from the playground, so that by the time I’d gotten out of the car and walked across the lawn, it was too late for him to hide the cigarette.

He whirled around, clearly startled, his gaze first on me, then darting nervously about the grounds, as if in fear of snipers.

I nodded toward the pack of Marlboros that winked from his shirt pocket. “When did you start?”

He took a long, defiant draw on the cigarette, his body now assuming a sullen teenage swagger. “I don’t do it all the time.”

“So, in this case, what’s the occasion?”

He shrugged. “I guess I’m jumpy.” He let the cigarette drop from his fingers, lifted the collar of his parka, and in that instant he seemed to retreat to an earlier time, taking on the sullen hunch of a fifties teenager, a rebel without a cause.

“This thing with Amy,” I said. “It makes everybody jumpy.”

“Yeah, sure.” He ground the cigarette into the dirt with the toe of his shoe, snatched the pack from his shirt pocket, thumped out another and lit it.

“It’s okay to be a little nervous,” I told him.

He waved out the match and laughed. “Oh yeah?”

“But there’s a difference, Dad.” He took a long draw on the cigarette and released a column of smoke that narrowly missed my face. “You weren’t at her fucking house.”

He’d never used that kind of language in front of me before, but it didn’t seem the right time to quibble about matters that now struck me as infinitely small. The last thing he needed, I decided, was a scolding.

This appeared to disturb him more than my having caught him with a cigarette.

“I want to hang around here for a while,” he said.

“No, you have to come with me,” I insisted. “There are a couple of policemen who want to talk to you.”

His face stiffened and an icy fear came into his eyes. “They think I did it, right?”

“You know, whatever happened to Amy.”

“There’s no evidence that anything happened to Amy.”

“Keith,” I said. “I want you to be very careful when you talk to these cops. Think before you answer. And be sure you don’t lie about anything.”

“Why would I lie about something?” Keith asked.

“Just don’t, that’s what I’m telling you. Because it’s a red flag.”

He dropped the cigarette and crushed it with an odd brutality, as if he were angrily stomping the life out of a small defenseless creature. “I didn’t hurt Amy.”

A dry scoffing laugh broke from him, one whose exact meaning I couldn’t read. “Yeah, right, Dad” was all he said.

Meredith had served Kraus and Peak coffee and cookies by the time I returned with Keith, but I couldn’t imagine that she’d been able to do it in a way that actually made them feel welcome.

“This is Keith,” I told them as I ushered my son into the living room.

Both detectives rose and smiled and shook Keiths hand. Then they sat down on the green sofa, Keith opposite them in a wooden rocker.

“You don’t have to stay,” Peak said to Meredith. He looked at me. “You, either, Mr. Moore. This is just a friendly chat.” He smiled. “If it were any more serious than that, we’d be reading Keith here his rights.” He glanced at Keith and the smile broadened. “Just like they do on TV, right?”

Meredith opted to busy herself in her small office at the rear of the house, however, and so it was just three men and a teenage boy in the living room when the questioning began.

Then, almost immediately, it was over, with little more established than what I’d already told Vince Giordano, that Keith had not left Amy alone in her house, that he’d gotten home a little before midnight. The only new facts were that my son had walked from Amy’s house into the village, then along its back streets, and finally over to the ball field where he’d sat alone on the bleachers for a time, then gotten up and walked home. At no time during this late-night sojourn had he talked to anyone. He’d called home at just before ten, he said. I’d answered the phone and he’d told me that he intended to stay out a little later than usual. I’d asked if he needed a ride, and he’d assured me that he didn’t. At that point, he and I had agreed that he was to be home before midnight. Which, he told Kraus and Peak, he had been. The exact time, he said, was seven minutes before twelve. He knew this because he’d glanced at the large grandfather clock in the front foyer before going upstairs to his room.

As I listened to Keith’s answers, I began to relax. Nothing Keith said surprised me and nothing contradicted my own understanding of his movements and activities that night.

“So,” Kraus said, “after you hung around the ball field for a while, you went straight home?”

“The ball field is only a few blocks from the Giordanos’ house, isn’t it?”

“Did you pass their house again?”

“You went straight home,” Peak said, “Like DO NOT PASS GO?”

Keith chuckled, but mirthlessly, a laugh I heard as a mocking response to Peak’s reference.

And so it didn’t surprise me that Peak’s attitude immediately hardened. “How’d you get home?”

“You have a learner’s permit?” Peak asked.

“My uncle drove me.”

Want more thrillers? Sign up for Murder & Mayhem's newsletter and get recommended reads delivered straight to your inbox.

Kraus took a notebook from his jacket pocket. “What’s your uncle’s name?”

Keith looked at me as if asking if he should answer.

“Where does he live?” Kraus asked.

“Near the school,” Peak said. “The elementary school.”

“Where does he work?”

“He works on his own. He paints houses.”

Kraus jotted something in his notebook, then returned his attention to Keith. “So your uncle drove you to Amy’s house, and then, after Mr. and Mrs. Giordano came back home, you walked to town—have I got that right?”

“And then you went to the ballfield, and after that you walked home?”

“All the way from the center of town?”

Keith shook his head. “No.”

“But you could have called home, right, gotten a lift?”

“Even that late?” Kraus asked.

“No,” Keith answered. He thrust his head backward and ran his fingers through the tangles of his hair. “I like the night,” he said.