That’s the stuff hard-boiled detective novels are made of. And Dashiell Hammett’s The Thin Man serves up all three in epic proportions. Originally appearing in the December 1933 issue of Redbook magazine, Hammett's detective tale was published in book form in January 1934. On May 25, 1934, the film version of The Thin Man hit American theaters. It was a box office smash, and remains one of the most beloved films of the classic Hollywood era.

Hammett himself was born on May 27, and would have celebrated his 124th birthday this year. In honor of the author and his contributions to the mystery genre, we're revisiting The Thin Man. New to this thrilling tale? Now's the perfect time to crack the case.

The Thin Man follows husband-and-wife sleuthing duo Nick and Nora Charles plus their schnauzer pup Asta. Nick is a former private investigator who retired from life as a detective after marrying his socialite partner Nora. Together, they carouse and schmooze their way through the speakeasies of the Big Apple during the final days of Prohibition.

The narrative opens at Christmas time. Nick and Nora are toasting the holiday season when a woman turns up dead. Nick just happens to be acquainted with her employer Clyde Wynant, who quickly becomes the police’s top suspect.

The list of potential murderers snowballs from one (thin) man to the entire, insane Wynant clan, his professional rivals, and shady business associates. Of course, Nick becomes entwined in the mystery.

Those reading Hammett for the first time will likely anticipate cynicism in both the dialogue and characters. What you may not see coming is the total absurdity of some situations.

Looking for more classic noirs? Sign up for Murder & Mayhem's newsletter, and get our most thrilling picks delivered straight to your inbox.

For instance, when Nick and Nora are attacked in their hotel room, instead of shielding Nora from harm, Nick intentionally knocks her out, so she’ll stay out of the way. Nora then gets angry at Nick—not for clubbing her over the head, but because she wants to be a part of the action. Obviously women’s lib wasn’t exactly a thing in the 1930s, but if the book’s token femme fatale (Wynant’s melodramatic ex-wife Mimi) can dominate and manipulate every male character she meets, then Hammett could’ve given Nora the gumption to fight back.

Related: 8 Dashiell Hammett Short Stories That Will Get Your Heart Pounding

One of the biggest highlights in this short, fast-paced detective tale came in the form of Gilbert Wynant, the death-obsessed son of Clyde and Mimi. As a modern-day character, he’d likely be dressed in gloomy attire with a dark cloud perpetually hanging over his head. But 80 plus years ago, he was a well-dressed, eccentric kid struggling to find where he belonged. Gilbert’s scenes with Nick add glimpses of intellectualism that contrast with the frivolity of the post-Prohibition era lifestyle. And the pages-long discussion about cannibalism in America, although totally random, was really thought provoking and compelling.

That give-and-take between dark and twisted murder mystery and fluffy romp pervades the entire novel, making it a quick and captivating read, especially for the Dashiell Hammett novices among us. 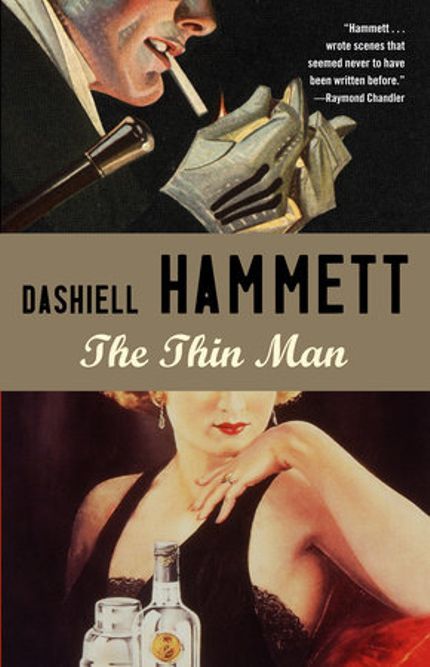 Featured photo via audiobook of "The Thin Man"