A young girl is tried for murder in this New York Times bestselling novel and film adaptation.

Following two storylines, one of Kya growing up in the marsh and the other of an older nineteen-year-old Kya who is charged and tried for murder.

Kya Clark is known as the “Marsh Girl” around the quiet fishing village of Barkley Cove. She’s barefoot and wild and doesn’t fit in at all with civilized people. But Kya has learned more about living than most. She’s been living off the land her entire life and knows what it takes to survive. She also knows about solitude, a feeling that pushes her into town and into the lives of two very different young men. They see her as wild and beautiful, even if the rest of the town only sees the wild. But all that changes when Chase Andrews is found dead. And in late 1969, that means Kya is an immediate suspect.

Reese Witherspoon fell in love with the novel, selecting it for her Hello Sunshine Book Club in September. This endorsement launched the book into readers' hands, where it quickly launched up the bestseller lists. It was selected as Barnes & Noble’s Best Books of 2018, was ranked by Publishers Weekly as the 14th bestselling book of 2021—an impressive three years after publication—and was on the New York Times bestseller list for an astonishing 168 weeks, selling over 15 million copies since its release.

But Witherspoon wasn’t done with the book. Shortly after championing the book, Fox 2000 purchased the film rights and signed Witherspoon’s Hello Sunshine production company to bring the film to life. Given how pivotal Witherspoon was in the book’s success, she was an obvious choice to ensure the success of the movie.

Where the Crawdads Sing 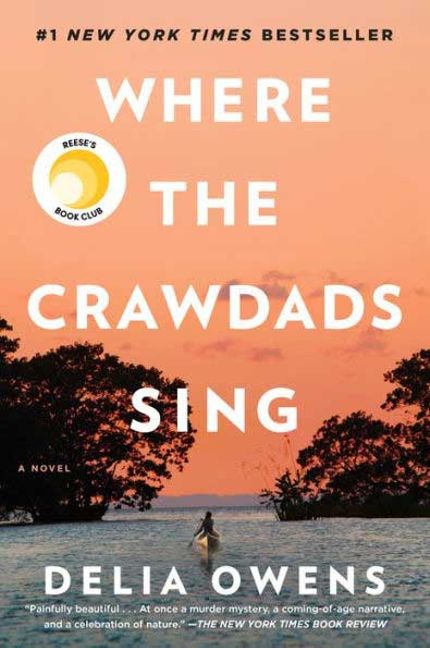 After Fox Studios was sold to Disney, Fox 2000 was shut down in 2019. But Sony Pictures Entertainment quickly saw an opportunity, grabbing former President Elizabeth Gabler and joining forces with HarperCollins to create an entirely new studio, 3000 Pictures, dedicated to bringing book adaptations to life.

Despite rumors that she would direct, or even star in, Witherspoon brought in Olivia Newman (First Match, Chicago Fire) to direct, and tasked screenwriter Lucy Alibar (Beasts of the Southern Wild) to capture the lyrical tone of the novel in the screenplay.

As Kya’s journey takes place during two different timelines, one where she’s markedly younger than the other, two actresses were brought on to satisfy each role. Daisy Edgar-Jones (Normal People) plays the older Kya, and ten-year-old Jojo Regina (The Chosen) plays Kya as she grows up in the marsh. Tate Walker, the young man who is Kya’s childhood friend and first love, is played by Taylor John Smith (Sharp Objects), and Chase Andrews is played by Harris Dickinson (The King’s Man).

To capture the evocative mood of the novel and give the movie a memorable edge, Taylor Swift was asked to write and sing an original song. She came up with ‘Carolina’ with Aaron Dessner producing. Her main focus was creating a song that matched the “haunting and ethereal” atmosphere that was so vividly present throughout the book.

Filming took place from March through June 2021 in Houma and New Orleans, Louisiana, primarily. The terrain itself was tricky to shoot, taking place in the marshlands and swamps surrounding New Orleans. Reportedly, the set once flooded, alligators and other wildlife were a constant presence, and finding locations in the constantly shifting waters was no easy feat. But they were able to capture the scenes, and the movie was released in theaters in July 2022. Despite critical reviews, it became a sleeper success, bringing in more than $180 million worldwide.

The book isn’t without its own controversy and criticism. There are lingering rumors that much of the plot follows a similar turn of events that author Delia Owens experienced while living in Zambia in the mid-1990’s. With both the novel and then again with the movie premiere, news outlets reminded the public that Owens is still wanted for questioning for a murder that occurred while she and her then-husband were working as animal conservationists.

The murder in question was captured by an ABC film crew documenting the Owens’ work. While filming gunshots sound and an unidentified man and suspected poacher falls. You never see the shooter, and authorities never found a body, but with plenty of animals roaming in Africa, that is to be expected. In fact, in the aired footage, the narrator blatantly states that “the bodies of the poachers are often left where they fall for the animals to eat.” But witnesses implicated Owens husband and his son.

Owens has denied any involvement or knowledge, but many familiar with the events have pointed out the uncanny similarities between both the real and fictional events. The similarities of a girl in isolation struggling against the push-pull duality of humanity and nature are obvious, and Owens experience as a nature writer creates vivid and striking prose. But there are other similarities, as well—including the unexplained murder and the twist at the end. Taken as a whole, it's understandable why questions continue to be raised.

There are also criticisms of the characterizations of the people inside the story. Accents and certain vernacular are used as a way to delineate between the good and the bad. Race relations are depicted naively, and Kya herself has been described as falling too easily into the ‘manic pixie dream girl’ trope.

Still, the book and movie continue to be praised by audiences and have enjoyed widespread success. The movie was released on Netflix at the end of November 2022, where it can still be streamed.