Opposites sometimes make for the best team, and that couldn’t be truer for criminal psychologist Kit Franklyn and chief medical examiner Andy Broussard.

When a horrific string of murder-suicides darken the streets of New Orleans, the duo sets out to solve the case. As they dive deeper and deeper into the disturbing details of the case—namely, that the perpetrators all hum nursery rhymes before committing their shocking acts—they go down a dark path involving an old Cajun curse that’s resurfaced.

Read on for an excerpt from Cajun Nights, and then download the book. 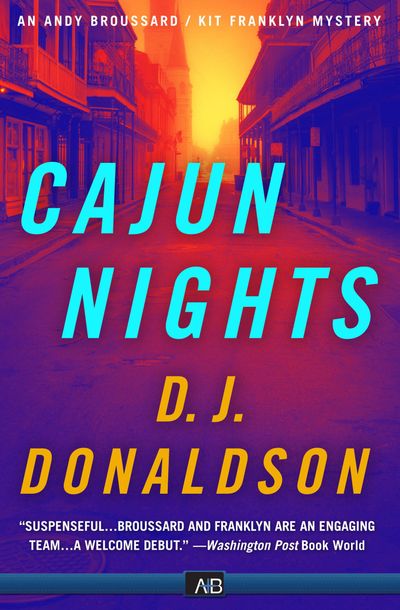 “I was hoping you were here,” Charlie Franks, the deputy medical examiner, said, stepping partway into Kit’s office. “I’m taking all the fieldwork today and I’ve just been called to a scene that sounds like it might match the murder-suicide profiles the computer gave us the other day. Like to come along?”

“Would I ever!” she replied, leaping to her feet.

Franks grinned. “Kind of thought that’d be your answer.”

Franks’s car held no surprises. Fixed with rubber bands to the visor on the driver’s side was a ball-point pen, a little green notebook, and a tire-pressure gauge. Riding the hump between the driver and passenger was an empty color-coordinated combination wastebasket and a full Kleenex dispenser. Near her feet on the right sidewall was a small fire extinguisher. The floor mats were clean and bright, and the dash wouldn’t dirty a white glove. She was sure that he could produce emergency flares if asked.

About a hundred yards from their destination, they encountered a roadblock. After identifying themselves to the cop who was turning everyone else around, they were allowed through. Railroad cars lay scattered along the tracks like toys flung by an angry child. The remains of Leon’s car lay upside down beneath the belly of a derailed flatcar carrying a massive piece of blue machinery partially covered by a green tarp. A half-dozen men were working a row of jacks that had been placed under the railway car. Near a tow truck that had been attached to the pinned auto by a huge chain, a man kneeling by a welder’s helmet was fiddling with the hoses from a pair of metal tanks.

They pulled onto the sandy shoulder behind a string of other cars and got out, Kit having to fight through grass nearly up to her knees. As they approached the crossing, a pear shape in a blue-striped seersucker suit appeared from between two jackknifed railway cars up the line. With his tiny feet and close-cropped hair, the man inside the suit reminded Kit of a bowling pin. Seeing Franks, he waved them over.

“We figure you’ve got two customers in there,” he said, pointing to the wrecked auto.

“But it’s gonna be awhile before we can get ’em out.”

“Any in the train?” Franks asked.

“No, but we nearly had some more. I dunno if it’s because we get our drinking water out of the Mississippi or what, but the people in this town are gettin’ crazier every day. This was no accident. We got an eyewitness who said this car rammed the train deliberately. And before it did, the driver tried to push somebody else onto the tracks.”

“So I heard. Dispatch also said something about him locking a guy in the trunk.”

“Just another day in the big city.”

“Where’s the other car?”

“The one that was pushed onto the tracks.”

“Split. Guess they didn’t want to get involved. Probably never will know who they were.”

“You said there was an eyewitness,” Kit interjected. “Where is he?”

“We taped his statement and let him go.”

Responding to the puzzled look on the man’s face, Franks introduced Kit to detective Gabe Santos.

“Sure, it’s over there on the floor of my car.” He gestured toward the first car in the line on the shoulder. “Just don’t erase anything by mistake. If you have any doubts about which button to push, come and ask me.”

The sun had made the detective’s car unbearable. Noticing that he had left the keys, she slid behind the wheel, started it, and flicked on the air conditioning. It was a cheeky thing to do, but the heat made it necessary. As the tape played, she found the witness so articulate, and Santos so thorough in his questioning, that she felt as though she had been there herself.

While listening, she watched the workmen’s progress at the crossing, where they soon had the railroad car raised enough for the wrecker to pull the pinned auto free. When they got it flipped over, it was obvious that no one inside could still be alive. The front part of the roof and the trunk were crushed nearly flat. Only the rear window was recognizable. As Kit looked at its odd configuration, a central oval flanked by two circles, she felt she had seen the pattern before.

When Santos asked the witness whether there was any evidence that the driver of the death car might have been drinking or on drugs, the answer made her forget all about the car’s rear window.

“He moved kind of stiff, like a windup toy, only not so obvious,” the taped voice said. “It’s kinda hard to explain, but it just wasn’t right, and he was… not exactly humming, but was doing something like this.” The witness reeled off a few bars of music using grunts instead of words. The-tune was familiar and she said it to herself at the same time Santos said it on the tape.

“Yeah, that’s it,” the witness said. “And his face had no expression on it.”

She let the tape run to the end of the interview and turned it off. “Old MacDonald Had a Farm”! Her eyes glazed and she withdrew into the memory of a conversation she’d had with one of Barry Hollins’s neighbors. He had said that a few minutes before the fire, Hollins had walked by whistling “Pop goes the weasel,” and had ignored an invitation to play golf. This was the second time she had thought about that interview, which initially seemed of no value. The first time was when she was going over the old files on her desk.

One of those files contained a case that had begun with two friends out for a day of duck hunting. Before reaching their destination, the fellow driving was suddenly hit in the face with the butt of his passenger’s shotgun. When he came to, the car was against an overpass guardrail and his friend was blasting away at vehicles on the highway below. Fearing for his own life, the driver pretended to still be unconscious. A short time later, the other man jumped or fell from the overpass and was killed.

She had read the police transcript of the driver’s testimony so often she had no trouble recalling it now. The driver had said that the whole time his friend was behaving so strangely, he was singing about the woods and teddy bears and picnics. A song from an old radio show for kids, he said. He couldn’t remember the name of the program but could recall some of the song. “If you go down in the woods today, you’re sure to have a surprise”… something… something… something. “Today’s the day the teddy bears have their picnic.”

That song was what had first reminded her of Barry Hollins whistling before the Algiers fire. It was such a weak coincidence that she had completely forgotten it. But here it was again. A few hours ago, a man singing “Old MacDonald” had locked his passenger in the trunk and driven into the side of a train. Three cases, all similar, all where the killer was either singing or whistling a children’s song. She switched off the engine, knowing as surely as she ever knew anything that she was on to something. She also knew just as surely that she wasn’t going to present such a wild idea to Broussard without a lot more evidence. But where to get it?”