Is The Pale Blue Eye a True Story?

The film adaptation of Louis Bayard’s 2006 novel, The Pale Blue Eye opens this month on Netflix. Starring Cristian Bale and Harry Melling, It features a youthful Edgar Allan Poe investigating multiple murders at West Point Military Academy. As he proved in stories such as "The Disappearance of Marie Roget", Poe was the master of blending fact and fiction, but how much of this tale about him is real?

Edgar Allan Poe almost single-handedly created the detective story, his master sleuth C Auguste Dupin was the model for both Sherlock Holmes and Hercule Poirot. The author’s chaotic life and his ability to create tales of logical deduction have likewise proved a source of fascination to crime writers of later generations.

There’s no evidence to suggest that Poe ever investigated a real crime, but that hasn’t prevented him from featuring as the detective in several mystery tales including John Dickinson Carr’s The Gentleman from Paris and Manny Meyer’s The Last Mystery of Edgar Allan Poe. None have met with the success of The Pale Blue Eye. 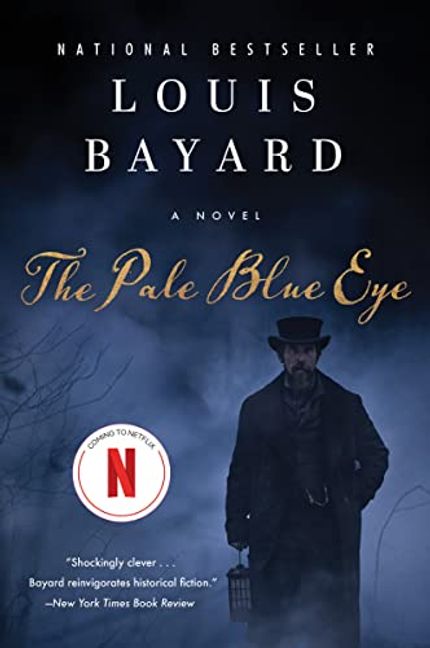 Louis Bayard’s Edgar-nominated mystery draws on Poe’s brief time as a cadet at the US Military Academy in West Point which began in July 1830 and ended ignominiously when he was expelled following a court martial in January 1831.

In The Pale Blue Eye (the title is lifted from a description in Poe’s celebrated story of murder and remorse The Tell-Tale Heart) a gray and mist-wreathed West Point becomes the scene of a series of grisly murders. They are solved by retired detective August Landor aided by the 21-year-old Poe. None of this actually happened, though you suspect that Poe himself would enjoy the idea of people believing it did.

During his seventh-month spell at West Point, the writer’s behavior was so outlandish—he was frequently drunk and once turned up on parade stark naked—that rumors of what had gone on in the Hudson Valley would circulate around him for the rest of his life and beyond. One recurrent—and unfounded—story for his expulsion included murder.

Despite West Point’s reputation for strict discipline and Spartan living conditions, bad behavior was not uncommon at that time. Both of Poe’s roommates were also court-martialled and expelled—one for twice setting fire to campus buildings. Even so, Poe’s antics were notable. He also had a wild past. He’d left the University of Virginia aged 18 with no degree, a gambling debt said to have totaled over $2500, and possibly having broken the heart of a fiancée. Little wonder then that his fellow cadets invented all kinds of crazy stories about the future author. One of them even cast him as the illegitimate grandson of Benedict Arnold.

It’s fair to say that Poe did little to discourage this sort of talk. He was a young man who cultivated an air of mystery, a romantic who hankered after the sort of image—mad, bad, and dangerous to know—the British poet Lord Byron had established for himself a decade or so earlier. If people wanted to believe stories of slayings and treasonous ancestors, then so be it.

Poe had arrived at West Point, aged 21, after rising to the rank of Sergeant Major in The Artillery Regiment. The Military Academy had been open for less than thirty years, but, under the leadership of Colonel Sylvanus Thayer, had already built up a formidable reputation. Poe’s place had secured through the intervention of his wealthy and influential foster father, John Allan.

Poe’s relationship with his guardian was fraught. Allan was a pathological womanizer and, following the death of Poe’s beloved and indulgent foster mother, Frances in 1829, he swiftly married again. His new bride Louisa was a woman who’d already born him twins. Poe was furious.

The young man’s quest for a reliable father figure forms one of the central themes of The Pale Blue Eye. Here a potential replacement for the shabbily behaved Allan comes in the form of detective August Landor. Landor, like Poe’s future creation Auguste Dupin, lives a hermit-like existence—in his case in a dark cabin in the woods of New York State. He’s taciturn and reliable, though darkness hovers in his past.

Landor arrives at West Point after the body of a cadet is found hanged and with the heart surgically removed. The down-to-earth detective whose expertise is in forensics soon finds himself being assisted by Poe. The young man’s fascination with the occult leads the pair of them into a shadowy gothic world of horror where a deranged serial killer lurks.

There’s nothing to suggest that anything like this ever actually happened at West Point, either during Poe’s time or since. While the novel paints a realistic and plainly thoroughly researched picture of the lives of the cadets, whether they are enduring long forced marches or carousing at Benny Haven’s Tavern, the real truths that The Pale Blue Eye draws on so beautifully are those of character. Bayard’s version of the drunken and needy Poe, a young man of failing health at once capable of brilliant logical analysis and yet also of believing in spectres and black magic, feels strikingly true to life.

The Best Mystery and Thriller Movies on Netflix, Hulu, and Amazon Prime Video This May

Both novel and movie are also filled with clever allusions to Poe’s future writing. Landor is an obvious model for the world’s first private investigator, a raven hovers on the edge of everything, the style of the murder seems to mirror the killing in The Tell-Tale Heart, while the surgeon’s daughter, the frail Lea Marquis with whom Poe appears besotted, is an echo of his future bride Virginia Clemm (celebrated in the poems Lenore and The Raven) who’d die of tuberculosis aged just 24.

Though it may not be completely true, there’s plenty that’s both realistic and fantastical to enjoy in The Pale Blue Eye, whether you are a fan of Edgar Allan Poe—or not.