A Man Can’t Escape His Past in This Riveting Thriller

Jason Harrow’s life is about to become unhinged…

What do you do when your past—one that you have desperately tried to erase—comes back to haunt you?

In his newfound life, Jason Harrow has become a model citizen—someone others look to. He’s built a stable life—complete with a loving family—in the American Midwest, and has finally been able to move beyond his tumultuous past—one that included toxic danger and deceit at every turn.

Or so he thought. When the phone rings one morning, and it’s his former lover claiming her daughter is missing, Jason’s life once again begins to unravel. She claims he’s the only one who can find the missing girl, but he quickly learns that what he thought was going to be a straightforward missing persons case is actually far more complicated. On the run from both the terrorists who seek to attack the country, and from the police, Jason is in a race against time to prevent mass destruction—even if that means sacrificing his own life.

In this pulse-pounding thriller from Edgar Award-winning author Andrew Klavan, readers are thrown into the high-stakes, high-payoff world of Jason’s former life—one that he now must keep a secret from his family.

Read on for an excerpt from Empire of Lies, and then download the book. 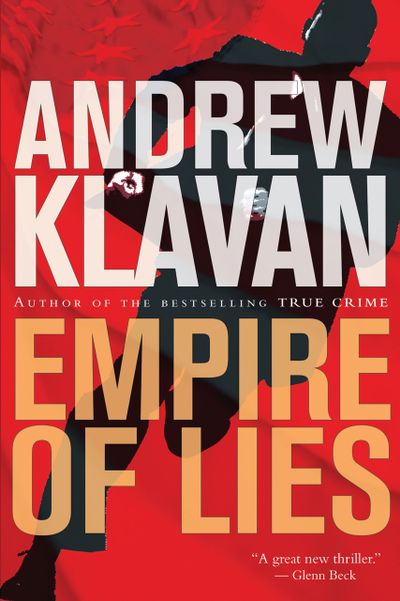 “Look, I gotta get back to the city,” she said. She stood up. She took hold of her purse. “Are you gonna drive me, or do I have to hitchhike?”

I give myself some credit here. It would’ve been a lot easier to just let her go. Let her go and forget about her. Then I could’ve finished up with the Realtor, cleaned out the house, put it on the market and gone home, back to the Hill. I could’ve walked away from this, from all of it, even from the End of Civilization as We Know It. I mean, what was that to me?

But the thing is, when you take charge of someone, you take responsibility for her, too. If I’ve learned nothing else in life, I’ve learned that. So I took a sizable chomp out of a piece of toast. And chewing on the mouthful, I said, “Why don’t you sit down, Serena.”

“I gotta go,” she insisted.

“Sit down,” I insisted back.

She snorted with scorn. “Yeah, right. Like you’re gonna make me? I didn’t think so. ’Bye.”

I cracked up. I dropped my forehead into my hand, laughing. Kids. “For crying out loud, Serena. Would you sit down, please?”

“Stop laughing at me, God damn it! All right, that’s it! I’ll hitchhike.”

She started to flounce off. I sighed. I reached out from my seat and grabbed hold of her arm. It was so thin, my thumb touched my knuckles.

“Let go of me!” She yanked away violently. I let her go and she stumbled back a step. “You fucking pervert.”

I stood up, towered over her, blocked her way. “Sit. Down. Now. I’m not kidding.”

Her eyes moved to the door. She thought of trying to rush past me. Then she thought better of it: She wouldn’t have made it. She gave me her angry teenaged fish frown—she waggled it up at me.

“Call the police then.”

She started, and her face went blank as if a little shock had gone through her. I seized the moment. I grabbed the purse out of her hand.

“Give that back!” she said, but weakly.

I snapped the purse open. I dug out her cell phone. I tossed the purse on the table. Held the phone out at her.

For once, she couldn’t think of anything to say. No childish taunts, no naïve threats, no ignorant arguments. The whole teen arsenal was shot. Her pale face trembled; her eyes pleaded and grew damp.

She sank slowly, resentfully, back into her chair. I stood above her, looking down at the top of her head. I could see her white scalp through the part in her dark hair. It made her seem very vulnerable somehow. I felt for her.

“Now who got killed?” I asked.

She looked up suddenly, shocked and terrified.

“Last night,” I said. “You said you didn’t know they would kill him. Who were you talking about?”

She lied in answer without any hope that I’d believe her. She let her head sink again, her gaze on the table. She didn’t even bother to meet my eyes. “I didn’t say . . . I don’t remember saying anything like that.”

I opened her phone. I laid it down open on the table in front of her, right under her nose. I pressed the numbers. As I pressed them, they showed up on the readout screen, large and bright. 9.1.1. I held my finger over the CALL button.

“Let me explain how this works,” I said. “I’m the grown-up. You’re the child. When I tell you to do something, you do it. All right? Now let’s give it a try. Answer my question, Serena. Who got killed?”

She didn’t answer. I heard her swallow.

I pressed the CALL button.

Her two hands fluttered out together. They seized the phone and snapped it shut. Her head sunk down, she clutched the phone close to her belly as if she were afraid I’d snatch it away again.

“If you call the police, they’ll know,” she said softly. “They’ll know it was me.”

“The people. The people who . . . did it. They have guys who listen. To the radios. They can get into the computers, too. They’ll know if the police find out. They’ll know it was me who told them. There’s no one else it could be.”

She lifted her face to me then, her little-girl face, helpless and sick and pleading. I looked down at her and my heart just sank—it felt like a stone inside me dropping into a well of fathomless darkness.

I could see it now. I couldn’t see it last night, but now in the morning light it was obvious. I could see the resemblance between us. I was certain she was mine.

“If you call the police,” she said very quietly, “these people—they’ll know. They’ll know and they’ll kill me, too.”

Then, crying, she told me her story.