A Sherlock Holmes Novel Without Sherlock

I would never argue with anyone who claimed that Foyle’s War is the best series in the history of television. This wonderful series is set in a small English coastal town during the World War II era and features a police detective (played by Michael Kitchen) who is intent on solving personal crimes while the rest of the world confronts the reality of a horrific war.

The creator of the series—and its primary writer—is Anthony Horowitz, also famous for a best-selling series of young adult novels. Three years ago, he wrote a Sherlock Holmes novel, The House of Silk. This is what I wrote when it was published:

“As an ardent aficionado of Holmes, I am a member of the Baker Street Irregulars, his foremost fan club, have read all 56 short stories and four novels written by Doyle many times, and maintain that The Hound of the Baskervilles is one of the three best detective novels ever written (along with The Woman in White and The Maltese Falcon).

Related: The Return of Moriarty

“I have also read several hundred of the stories and novels featuring Holmes by other writers and cannot tell a lie: most of them are terrible, some are adequate, and a few are very good, notably the three Moriarty novels by John Gardner, Richard Boyer’s The Giant Rat of Sumatra, Daniel Stashower’s The Adventure of the Ectoplasmic Man, and Sam Siciliano’s The Angel of the Opera.

“Now, however, we have a new book that is the best of them all, The House of Silk by Anthony Horowitz. I have never before read anything by this author, though he was the creator and writer of one of the best television series of all time, Foyle’s War, about a British police detective dealing with crime in an English coastal village around the time of World War II. His young adult novel series about Alexander Rider have been international best-sellers.”

It took three years, but at last Horowitz has produced a sequel, of sorts, to that splendid book. Titled Moriarty, it is very different in tone and, lamentably, lacks a key ingredient: Sherlock Holmes, somewhat like making chicken soup and leaving out the chicken. 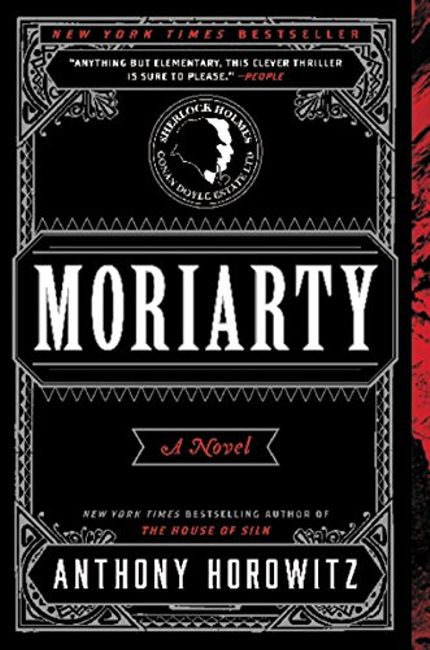 It is a story mainly told by Frederick Chase, an operative of the Pinkerton Detective Agency in New York, who has chased a notorious criminal across the Atlantic to London, where he has decided to emulate his hero—Professor Moriarty. He teams up with Inspector Athelney Jones of Scotland Yard to hunt him down, starting in the village near the Reichenbach Falls, where Holmes and Moriarty famously struggled, supposedly to their deaths.

A highly dubious Chase opens the narrative with a no-nonsense, obviously American-style question: “Does anyone really believe what happened at the Reichenbach Falls? A great many accounts have been written but it seems me that all of them have left something to be desired—which is to say, the truth.”

Chase is convinced that Dr. Watson got it all wrong when he described the death of his friend. True, Holmes was being relentlessly attacked by Moriarty and his gang, barely escaping with his life more than once. But, Chase asks, “…what makes (Holmes) think he will be safer on the Continent than he will be closer to home?”

After a good deal of traveling and trickery, the two adversaries, Holmes and Moriarty, face each other at the edge of the cliff and engage in a life-and-death struggle, according to Holmes’s account, recorded by Watson in “The Adventure of the Empty House,” which takes place three years after the alleged death scenario.

As Chase asks, however, “…is there not something a little unsatisfactory about this encounter? You have to ask yourself why Moriarty allows himself to be challenged in this way. Old-School heroics are all very well (although I’ve never yet met a criminal who went in for them) but what possible purpose can it have served to endanger himself? To put it bluntly, why didn’t he simply take out a revolver and shoot his opponent at close range?”

As befits a novel by this vastly talented author, there are numerous surprises throughout, and plenty of large and small adventures along the way. It is not the equal of The House of Silk, partly because of the absence of Holmes, partly because the style more closely resembles the work of an American writer (although Horowitz is English), but that does not mean it is less than excellent. It’s just that the previous book was so distinguished that almost anything else would have to fall short by comparison.

Otto Penzler is the founder of the Mysterious Press (1975), a distinguished publisher of literary crime fiction whose imprint is now associated with Grove/Atlantic, MysteriousPress.Com (2011), an electronic-book publishing company associated with Open Road Integrated Media, and New York City’s Mysterious Bookshop (1979). He has won two Edgars, for the Encyclopedia of Mystery and Detection (1977) and The Lineup (2010). He has edited more than 50 anthologies and written extensively about mystery fiction.

Featured photo of Sherlock Holmes and Moriarty at the Reichenbach Falls: Wikimedia Commons