No Beast So Fierce: The Book That Got a Man Released from Prison

Edward Bunker’s life of crime and incarceration strongly influenced both his writing and acting careers.

You may know him as Mr. Blue from Quentin Tarantino’s Reservoir Dogs, but long before he became an actor, Edward Bunker lived a life behind bars. His experiences as a criminal and an inmate would go on to influence not only his acting career, but also more than half a dozen books that bear his name.

Born on New Year’s Eve in 1933, Bunker’s earliest memories were of the drunken fights that characterized his parents’ relationship before their divorce when he was five years old. He then began the odyssey that led him down the path to a life of crime, from foster home to prison. Frequently unhappy in his surroundings, Bunker ran away from the foster home that he was placed in when his parents split up, and escaped from prisons and other institutions on more than one occasion. For years he was in and out of foster homes, hobo camps, military school, juvenile hall, and even a mental hospital.

Prior to his 16th birthday, Bunker had already been incarcerated in the infamous Preston Castle, where he quickly took to the predatory world within the walls. He would later write that his vicious and hardened reputation was simply a protective measure developed to survive in the equally hard and vicious world in which he found himself. By the time he was 17 years old, Bunker had the dubious distinction of being the youngest inmate ever to be incarcerated in San Quentin State Prison.

Bunker began writing in 1951, while in San Quentin. During his time spent in solitary confinement, Bunker was near the cell of death row inmate Caryl Chessman, who was writing his novel Cell 2455, Death Row  at the time—which was later made into a 1955 movie directed by Fred F. Sears.

With the help of former silent movie starlet Louise Fazenda, Bunker got access to a typewriter of his own and began work on what would eventually become his first novel, No Beast So Fierce. Pages of the manuscript were smuggled out of prison and given to Fazenda’s husband, film producer Hal B. Wallis.

Bunker was paroled in 1956, and, like the protagonist of No Beast So Fierce, found it difficult to reconcile life on the outside. He spent the next 19 years in and out of various institutions. During this time he orchestrated robberies, ran a drug racket, and was at one point arrested after a failed bank heist followed by a high-speed chase, all of which would be right at home in one of the movies in which he would later appear.

While in and out of prison, Bunker continued to write, and, in 1973, No Beast So Fierce was finally published. Not long afterward, the manuscript was used as evidence that Bunker was fit to leave jail and return to society. He was paroled for what would prove to be the last time, as he spent the rest of his days as a writer and actor, and never again returned to a life of crime.

Want more true crime books? Sign up for Murder & Mayhem's newsletter, and get our recommended reads delivered straight to your inbox.

Bunker’s time as a criminal—and, especially, behind bars—never completely left him, though, and it informs his writing and most of his acting performances. Dustin Hoffman bought the film rights to No Beast So Fierce, and in 1978 the book was made into the feature film Straight Time, in which Bunker also had his first role as an actor. From there he would go on to act in a variety of often small, supporting roles in films like The Running Man, Miracle Mile, Best of the Best, Tango & Cash, and, perhaps most famously, as Mr. Blue in Reservoir Dogs. While casting Bunker came at the suggestion of Chris Penn, Quentin Tarantino had in fact studied Straight Time while attending Robert Redford’s Sundance Institute. Bunker was also the inspiration for Jon Voight’s character in Michael Mann’s 1995 crime film Heat.

While acting, Bunker continued to write, publishing his second novel, The Animal Factory, in 1977—shortly after his parole. Three of his books have been made into movies, and he also wrote the screenplay for the 1985 film Runaway Train and worked as a consultant on the Jeff Bridges film American Heart—a film about an ex-con trying to acclimate to life outside of prison.

In fact, acclimating to life outside of prison is a recurring theme throughout most of Edward Bunker’s work, and in no place is it deployed more potently than in his stark debut novel, No Beast So Fierce, which chronicles the story of Max—a man who is good at being an inmate, but not so good at adjusting to the world outside of prison walls.

To gain more insight into Edward Bunker’s life in and outside San Quentin, read his masterful crime novel, No Beast So Fierce.

No Beast So Fierce 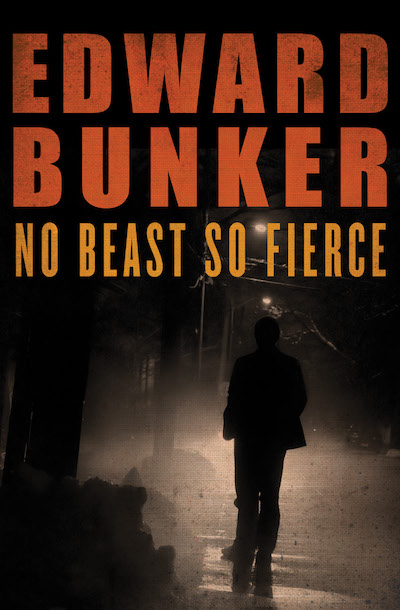 Want more true crime books? Sign up for Murder & Mayhem's newsletter, and get our recommended reads delivered straight to your inbox.

This article first appeared on The Lineup.

This post is sponsored by Open Road Media. Thank you for

supporting our partners, who make it possible for Murder & Mayhem to continue publishing the mystery and thriller stories you love.

Featured photo: From "Education of a Felon: A Memoir": St. Martin's Press