In the latest Nero Wolfe mystery, the famed detective must wade through old grudges, scorned lovers, and mob bosses to solve the murder of a political reformer.

Read on for an excerpt from The Battered Badge, and then download the book. 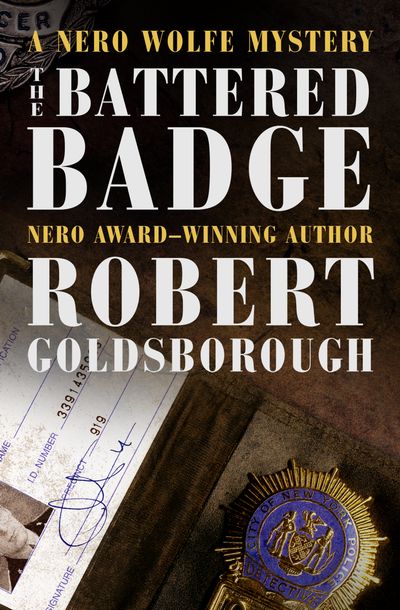 “Gentlemen,” Wolfe said, “thank you for being here tonight. Archie and Saul already know why we have convened, Fred, so it is time to bring you up to speed, to use one of Mr. Goodwin’s favorite phrases.

“We are going to investigate the murder of Lester Pierce, although we do not have a client and are unlikely to obtain one. However,” Wolfe continued, nodding toward Saul and Fred, “each of you will be reimbursed for your work at your usual rates.”

“I’m just curious,” Fred said, “and maybe this is none of my business, Mr. Wolfe, but why are you interested in this? And why is there no client?”

I knew the answer, and I’m sure you do as well as you read this: Wolfe was outraged at what had happened to Saul and was determined to avenge the attack on him. But I was intrigued as to how he would respond to the question.

Wolfe downed the first of his two beers and dabbed his lips with a handkerchief he had pulled from his center desk drawer. “You raise valid questions, Fred, and ones that demand an answer. But first, a question for you: How do you feel about George Rowcliff, who now is a captain?”

“You have made your point forcefully,” Wolfe said, holding up a hand, which for him is a strong gesture. “And I agree with your assessment of the gentleman, if he can be so termed. During Inspector Cramer’s forced furlough, Mr. Rowcliff also is acting head of the Homicide Squad, as you probably are aware.”

“I believe I speak for all four of us when I say that in any future relations with the New York City Police Department, we would far prefer dealing with Mr. Cramer rather than Mr. Rowcliff. Does anyone disagree with that opinion?” We all shook our heads.

“This is not to say I embrace all of Mr. Cramer’s techniques and attitudes, far from it. But he is easily the better alternative. As each of you is aware, he is under a cloud because of the murder of Lester Pierce and the attacks by Pierce on the inspector that were launched by the Good Government Group.”

“It seems like Cramer should be able to ride all this out,” Saul said. “He has taken a lot of criticism from the press and others many times in the past.”

“True, but there is something else the two of you probably don’t know,” Wolfe replied, looking first at Saul, then at Fred. “The inspector has been seen dining in a Little Italy restaurant with Ralph Mars.”

Want more Nero Wolfe mysteries? Sign up for Murder & Mayhem's newsletter, and get our most murderous picks delivered straight to your inbox.

Saul opened his mouth and probably was about to say “lovin’ babe” when Durkin spoke. “There’s been nothing in print about this unless I missed it.”

“You are correct, Fred,” Wolfe said. “But we have this piece of information on good authority.”

“Lon Cohen, no doubt,” Saul remarked. “And if I were to hazard a guess, the reason that meeting has not been in print is because the news of it came from a Gazette source Cohen and others on the paper may feel to be untrustworthy.”

“Your guess is more than a guess,” Wolfe said. “Now, to respond to Fred’s earlier queries: I believe I answered his first question, at least implicitly. I want to remove the cloud that hangs over Inspector Cramer so that he will resume his role as head of the Homicide Squad. As to the second question, no one has come forward as a potential client, although one individual has all but begged us to conduct an investigation. Unfortunately, he lacks the capital I normally require to undertake a case.”

Wolfe dipped his chin half an inch. “Your recent mishap has not in any way undermined your discernment. How do all of you feel about this undertaking?”

“Anything that might take that blockhead Rowcliff down a few pegs is jake with me,” Fred Durkin said. “Sign me up.”

“Fred said it better than I could have,” Saul added. “I’m ready for my marching orders.”

“As I said to Archie and Saul earlier, I begin with the assumption that the crime syndicate was not behind the killing of Mr. Pierce,” Wolfe told Fred. “Are you uncomfortable with my belief?”

“No, sir, not if you say so, although it sure seemed like a mob-style hit.”

“Such was surely the intent. Continuing with my assumption, does anyone have a theory as to who or what might be behind what the newspapers are terming an ‘assassination’?”

“What about someone inside that Good Government Group?” Saul asked. “I don’t know a lot about the organization, although I’ve heard—and read in a couple of the gossip columns—that there was some friction among the leadership.”

“Can you be more specific?” Wolfe asked.

“Two people each apparently feel they should take over as Three-G executive director: Roland Marchbank, the assistant executive director, and Laura Cordwell, whose role was in effect as administrative assistant to Pierce, although rumors were that she had, shall we say, a more personal relationship with him.”

Wolfe made a face. “You are suggesting the Cordwell woman is a Jezebel?”

“I have to confess that I don’t know my Bible all that well,” Saul replied, “but of course I know who she was, and Miss Cordwell certainly could play the role in a motion picture if the rumors about her have any substance.”

Saul nodded. “Yes, he had been for many years, to Audra Kingston Pierce, age fifty-five, who comes from money and is involved in a whole slew of charities.”

“Lily Rowan has met Mrs. Pierce several times,” I put in. “According to Lily, the woman is attractive, although she tends to be arrogant and pleased with herself. But she also is generous in contributing to good causes with both her time and her money. And the word is, she was well aware of her husband’s relationship with Laura Cordwell and, for whatever reasons, chose to ignore it.”

I went on, “Since we are beginning to sound like gossip columnists, I will throw this in: long before his liaison with Laura Cordwell, Lester Pierce already had a reputation as what Lily refers to as a lothario.”

When Fred looked puzzled at that word, I jumped in. “A lothario is a man who … well—”

“A man who seduces women,” Wolfe interrupted, clearly uncomfortable with the subject matter.

“Yet there was speculation that Pierce, who went by the nickname ‘Saint Lester’ because of his sanctimonious bearing and his church involvement, had his sights on running for governor one day,” I said.

“How could a guy hope to run for a big office like that with that kind of a private life?” Fred asked.

“It has been done before,” Saul responded. “Take our long-dead Warren Harding, well-known skirt chaser and father of a child by a woman he wasn’t married to. And he made it all the way to the White House. Okay, so he was not much of a president, but my point is that a lack of morality does not necessarily exclude someone from seeking high office if the candidate’s sins are not widely publicized—or sometimes even if they are. And it seems that Pierce’s lapses, while known in certain quarters, have not made it into print.”

“Your point is well taken,” Wolfe said. “We tend to glorify our political and business leaders, but many if not most of them have feet of clay in one area or another. We cannot eliminate the possibility that one of Mr. Pierce’s lascivious transgressions may have been the cause of his violent demise.”

“Okay, so we have to consider that either a wronged woman or a cuckolded husband could have bumped off Pierce,” I said. “And you also remain convinced the killing was not done by the crime syndicate?”

“I do,” Wolfe said. “Let us return to this Good Government Group. What else do we know about it?”

“For one thing—and it’s a big thing—the Three-G operation is heavily bankrolled by Weldon Dunagan, the multimillionaire grocery chain magnate who detests the syndicate,” Saul said. “One would have thought if the mob wanted to bump somebody off, it would be him, not Pierce.”

Want more Nero Wolfe mysteries? Sign up for Murder & Mayhem's newsletter, and get our most murderous picks delivered straight to your inbox.

“How did this Dunagan character get along with Pierce?” Fred asked.

“That is a question I could put to Lon Cohen,” I said, “but I can only assume they must have hit it off okay, because Pierce had been top dog at Three-G since its inception several years ago. I can’t imagine Dunagan would put up with anybody he didn’t like or didn’t think was doing a good job.”

“What constitutes a good job?” Wolfe posed. “After all, this group has, as you say, been around for several years, and what success has it had in battling organized crime? Not a great deal, by all accounts. One of the reasons I do not feel mobsters were behind Mr. Pierce’s death is they had little to fear from him and what is essentially his toothless operation.”

“We start by having you unearth everything you can about the essence of the meeting between Inspector Cramer and Ralph Mars at that restaurant in Little Italy,” Wolfe told Saul. “It is a difficult assignment, but I trust you will avail yourself of the resources at your disposal.”

“Fred, we need to learn more about Guido Capelli, the syndicate hit man who himself became the victim of a hit. Why was he killed, was he still a member of the mob, or had he become a rogue, working only for himself? But go forth cautiously, given what happened to Saul when he undertook to find out more about this man.”

“I know of some people who might be helpful,” Fred said, knitting his broad brow. “And I will be careful.” Wolfe’s expression told me he was well aware of the man’s limitations. As I have mentioned, Fred Durkin takes a backseat to no one in the bravery and loyalty departments, but he is not always the wisest of operatives. However, I was not about to quarrel with Wolfe’s decision regarding the assignment.

“Archie, you are to meet with Weldon Dunagan and ascertain his attitudes about Mr. Pierce, both as an executive and an individual. No doubt he will respond to your questions with platitudes about the dead man’s sterling character and his admirable work ethic. However, I know you to be a skillful and shrewd interrogator, so you should be able to penetrate Mr. Dunagan’s defenses.”

If you think Wolfe was buttering me up, you are all aces, but I got used to that approach a long time ago. Also, he did not provide any suggestions as to how I was to obtain an audience with Dunagan, and if I had asked, he would have given me his standard reply: “You are to act in the light of experience as guided by intelligence.” Swell.

Wolfe finished his second beer and considered each of us in turn. “Gentlemen, you have your initial assignments, and more may follow. Report your progress to Archie, and he will relay the results to me. I wish you all a good night.” He rose and made what he thinks is a bow, walking out of the office to the elevator.