The Last Real Thief in the Age of Cybercrime

In Mike Cooper’s thriller “The Downside,” professional thief Finn is fresh out of prison and about to take the biggest job of his life.

The downside to stealing? Well, you might end up in jail. That’s just what happened to Finn—a professional thief—seven years ago. Now that he’s out, he’s getting back in the game and taking on his biggest job ever: stealing $50 million worth of metal rhodium. Like most of his jobs, what he’ll be stealing is big, heavy, and nearly impossible to take away undetected.

As Finn formulates his plan, he realizes that there’s only one team that can get the job done: the same people who landed him in prison years before. Breaking in and stealing the precious metal will be the least of Finn’s worries. He’ll have to navigate the tumultuous waters of back-stabbing ex-partners and people with their own agendas if he wants to stay out of prison.

Read on for an excerpt of The Downside, by Mike Cooper, and then download the book. 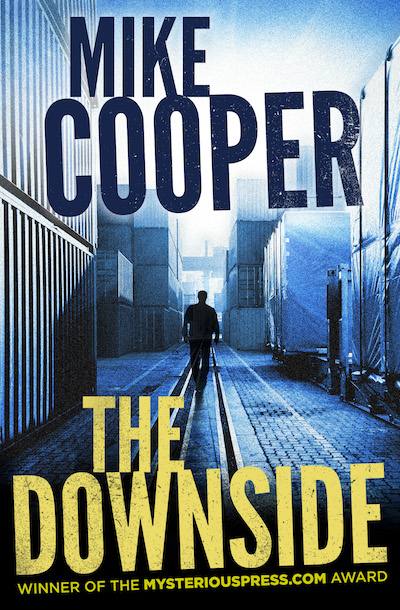 The hobo was no particular surprise, but when Finn saw a dust plume coming up the canyon, he knew they had a problem. They were deep in the New Mexico desert, railroad tracks disappearing into mirage in both directions the only mark of civilization.

Air brakes hissed and couplers banged as seventy freight cars’ worth of slack bunched up. The train jerked to a rough, grudging stop on the siding. Finn figured the engineer probably would have done a better job if Jake wasn’t pointing a gun at him.

“Two guys here,” said Jake over the comm. He sounded calm, which didn’t mean much. Finn had known Jake since high school, a million years ago, and had never seen him rattled. But he was surely in control. Even with his face covered up—probably using a bandanna, romantic that he was—Jake had People magazine looks and charisma to spare.

“That’s all of them.” Finn ticked a mental box. Like all the big railroads, Union Central kept their crews at a minimum. “Put them out of the way.” Jake would plasticuff them in a corner and stay in the locomotive to handle any calls from the dispatcher.

The hobo had found a nice spot on the deck of a grain car, shaded by the hopper’s slanting steel wall. By coincidence, the grainer was only two cars away from the ore gondolas. So when the old guy stuck his head out into the bright desert glare, the first thing he saw was the Deere excavator, still chained down to its flatbed, pulling up right alongside the track.

Finn jumped down from the flatbed’s cab, leaving his door open. A blast of diesel sounded as Corman, who was sitting at the excavator’s controls, swung its arm up and over the gondola. Corman was a huge man, his partially bald head almost brushing the cab’s roof. But his hand was delicate on the levers.

Another rumble as Asher pulled up in the open-trailer semi. His own style was less careful, and his truck slammed to a stop alongside the flatbed. Still, close enough. The excavator’s scoop rose, full of molybdenite, and Corman swiveled it around to dump into Asher’s trailer.

Asher stuck his head out the cab window to look back. No mask. Finn grimaced. It probably didn’t matter—no one was around to see and Asher could always shave off his ridiculous musketeer’s beard if he had to change appearance—but still. Asher did things his way, fuck you anyway.

Thirty seconds, and they were already unloading. Finn organized a tight schedule and generally managed to make it stick. His own version of just-in-time logistics.

Guys on a payroll could fuck around. When you were stealing the delivery, efficiency mattered.

“Get off there,” Finn called over the engine noise to the hobo. The man crawled out, obviously stiff from sitting on the jouncing metal platform for hours.

“This ain’t Alamogordo.” Grime had worn deeply into his face. Apart from the mainline and a battered metal shed, the siding was surrounded by emptiness—dirt, sand, and scrubby yucca, with a few low mountains purple in the distance.

And the dust from an approaching vehicle. Only a few minutes away now.

“Nope.” Finn himself wore a painter’s mask and sunglasses—the practical outlaw. “Sorry to do this, old-timer, but you got to go sit out of the way. There’s some shade by that shack down there.”

The hobo reached back to get his bindle off the grainer’s porch. Finn noticed he had a metal spoon, the handle bent over and tied to his belt with frayed twine, and a plastic soda bottle filled with water.

“You’re robbing the train, ain’t you?” He cackled briefly. “I didn’t think that ever happened anymore.”

“Sure, Butch.” He started to walk toward the shack but turned his head back. “Can I ask you something?

“Is there a lot of money in that? In a truckful of rocks?”

Finn shook his head. “Don’t pay any attention to us.”

Back in the truck’s cab, Finn pulled his binoculars from the pack and peered at the unexpected company, coming up fast. His hands were sweaty inside the latex, but combat gloves were fingerless, which was an obvious problem.

“Say who they are?” Asher’s voice.

“Not la migra.” Border Patrol vehicles were white with lightbars. These were black and unmarked. “Keep loading.”

“I locked the engineers in the toilet,” Jake said on the radio.

Want more crime thrillers? Sign up for Murder & Mayhem's newsletter and get the best crime and mystery delivered straight to your inbox.

“Stay there and keep your head down.” Finn wished he had a long gun, but they only carried sidearms. Big weapons were just a pain in the ass.

Until you needed them, of course.

A half minute later, he put the binocs down because the trucks were now clear enough.

Well, Finn couldn’t blame them. Three men were standing in the bed of the pickup, holding the roll bar as the truck bounced along the dirt road. The SUV had a sunroof, and another man stood through it, arms and torso free.

“Keep working,” Finn radioed as he opened the door.

“What are you doing?” Asher didn’t sound happy.

“All the more reason not to talk to them.” Jake was the voice of reason, as usual.

“Maybe we have common interests.”

Finn walked out with his hands halfway up in the air and stopped about a hundred feet from the train. A minute later, the pickup skidded to a halt on his right. The SUV continued another dozen yards, then stopped abruptly. Dust blew across the scrub. Four rifle barrels pointed over.

A moment of silence. Behind him, Finn heard the diesel engines idling. Corman and Asher were obviously waiting to see what happened.

“¿Quíen diablos eres tú?” one of the new arrivals called from the pickup.

Well, it was obvious enough now. Somewhere in these seventy railcars was an undeclared shipment, FOB the middle of fucking nowhere. Customs in El Paso couldn’t inspect every car even if they wanted to, and the railroads weren’t going to cough up for extra security. If Finn’s crew hadn’t arrived first, these jokers probably would have simply bled a brake line for a ten-minute delay, unloaded their bales of whatever, and disappeared before the engineers even noticed.

The man who’d spoken now hopped lightly from the pickup’s bed and walked closer. He wore a baseball cap backward on his head and an Abercrombie T-shirt tucked into faded black jeans. Just like any NMSU college student—except for the M16.

“What are you doing?” A mild accent, and he seemed more curious than upset.

“Transferring cargo.” Finn looked back at the gondolas for a moment. “You, too?”

“We’re not interested in rocks. Will you take that mask off?”

“No more than yourselves.”

Just a couple of general contractors working out a problem. And Finn still thought everything would be fine. They could make an arrangement and go their separate ways, never to meet again—because, really, they were in completely different lines of business. The guy even offered him a cigarette while they stood there, talking it out.

Jake, a quarter mile down at the front of the train, must have heard the new problem first.

“Uh, boss?” he said quietly into the radio. But it was too late. Heads were turning in the pickup, and a moment later Finn recognized the sound.

The guy might have pulled the trigger, but they both noticed new towers of dust on the other side of the train. The choppers were approaching in an attack vector, three abreast, and suddenly, a line of vehicles was banging out of some hidden canyon, red and blue lights flashing.

Finn ran toward the flatbed, expecting a shot in the back any moment. Gunfire sputtered, almost lost in the rapidly increasing noise of the chopper. Sirens rose in volume, dopplered by the speed of the approaching cars.

The cavalry had arrived.

“Shut it down,” Finn said into the radio before rolling under the truck, arms over his head.

He hoped the hobo had sense enough to stay out of the way. He hoped his guys wouldn’t do anything stupid. Two months of planning shot to hell, but forget that; they’d be lucky if they didn’t spend the next decade in prison.

Bullets spat into the dirt around him. An explosion. Dust flew everywhere, raised by rotor wash and vehicles skidding near the train. A man shouted nearby, the words lost.

Finn closed his arms over his head, holding back an urge to burrow into the dirt. In the chaos, trying to figure out what was happening, his mind couldn’t let go of one nagging question: Had the police arrived for them—or for the narcos?

And if it was Finn’s crew, how had they known?

Want more crime thrillers? Sign up for Murder & Mayhem's newsletter and get the best crime and mystery delivered straight to your inbox.

This post is sponsored by Open Road Media. Thank you for supporting our partners, who make it possible for Murder & Mayhem to continue publishing the mysterious stories you love.