A Covenant with Death: Who Killed Louise Talbot?

Everyone suspects the jilted husband ... but things are not always what they seem.

Everyone knows the spouse is always the murderer—especially when there’s an affair involved.

This seemed to be the case for Louise Talbot, who was found brutally strangled to death in her own home in 1923. Although her husband made the tearful phone call that led investigators to the scene, all evidence still points to him as the killer.

But, of course, things aren’t always as they seem.

Stephen Becker’s suspense novel A Covenant with Death is a fascinating look into human nature—and what brings people to kill.

Read on for an excerpt from A Covenant with Death.

A Covenant with Death 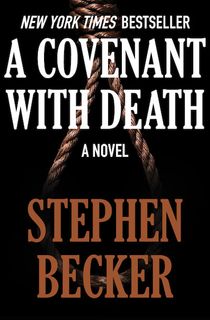 Bryan Talbot telephoned the police at 10:34 on the night of May third. His voice was wild; he was sobbing. He had just returned, so he said, from Peter Justin’s Bar and Billiard Parlor, where the town’s politics took shape, and had found his wife dead, in a bathrobe, bruises on her throat; she was lying in the hallway between the living room and the master bedroom. He called Alfred Harmsworth, our chief of police.

Alfred called Doctor Schilling, whom no one ever referred to as Doc, and ran to the Talbots’ house, towing a rookie named Tolliver who threw up when he saw the corpse. “That woman,” Tolliver said to me next day. His eyes went momentarily blank with horror. Alfred was in his 40s, and had been a captain of infantry in France; he had seen it all, legs and heads lying loose, barbed wire festooned with American intestines, but this was worse. “Probably I never laid eyes on a finer figure,” he said. “I had to examine her; and I knew why Tolliver got sick. My stomach turned, and the world was kind of fuzzy for half an hour.

She looked fine, except for the bruises on her throat. Beautiful. Long legs and that little waist and everything else exactly what a man would specify if he could get a woman from Sears, Roebuck; but she was dead. I would have paid $20 for her in a bathrobe the night before, but now she was nothing. Wood, or marble maybe. Was that all it was, Ben? That she was dead? Was that what made her ugly and me sick?”

“I imagine there was more to it than that,” I said. I knew about the Viennese revolution, so I pontificated for Alfred. “You wanted that woman, like everybody else in town — no, no,” (he had tried to protest) “I don’t mean that you’d have done anything about it even when she was alive, anyway not while anybody was watching, but way down deep all men want all women. Nothing much to do about it and nothing to be ashamed of. And whatever kind your own group decides is jazziest, you want that kind most. And there she was, all laid out on her back for you — but she wasn’t even a human being any more. She belonged to nature and not to you. And all the taboos we don’t even know we worry about hit you at one time, and below the belt. Spooks and the wrath of God. Evil spirits. Devils that would shrivel your equipment if you so much as let the thought of her cross your mind.”

Alfred was nodding. “I felt that way, sure enough. I’ve watched Doctor Schilling handle all sorts of bodies, and this was the first time I wondered how he could stand it. But I’m the chief, so I couldn’t get sick like Tolliver. Tolliver’s only 19. If that was the first naked woman he ever saw he may be ruined for life.”

“If that was the first naked woman he ever saw, times have changed,” I said.

“Yeah. Anyway I had Talbot to worry about. And when I got over the willies I remembered that somebody must have killed the woman.”

Talbot sat on a couch, pale as death himself, tears running quick and silent down his bruised face. Alfred noticed the bruise immediately, along the left cheek and temple, the skin barely broken and only a drop of drying blood. Talbot stank of whiskey. Every little while he ran the back of his hand across his upper lip and snuffled. Once he moaned. Doctor Schilling said Mrs. Talbot had been dead for only 20 minutes or half an hour, and then he covered her up and went to Talbot. “Lie down here,” he said, and Talbot broke out sobbing — long, strangled, airless sobs. He might have been thinking that if he’d stayed home it wouldn’t have happened; he might not have been thinking at all.

Doctor Schilling had cleaned Talbot’s bruise and given him an injection. Alfred would have preferred Talbot awake and babbling but no one ever argued with Doctor Schilling. Talbot began to quiet down, and Alfred caught him before he drifted off: “When did you find her, Talbot?”

Talbot answered slowly. “Just before I called.” A pause. “I tried to bring her to.” A pause. “Thought she’d fallen.” A pause. His eyes were closing. “Then I couldn’t … find a heartbeat. Thought she was—oh, God!”

“What’d you do after you called?”

“Rubbed her wrists. Water … put water on her forehead.” His eyes were shut and his breathing was quiet.

“Alfred couldn’t do much more then, but he tried a last jolt, hoping for a flash of truth from the drugged mind: “Who did it, Talbot?”

Talbot shivered. “She won’t leave me…. That fellow Rollins.” (Or so Alfred heard it.) “Nobody…. Nobody.… My wife.”

Alfred bent closer. “Talbot: did you do it?”

Want to keep reading? Download A Covenant with Death now.