Author Alan Jacobson Explores the Dark Side of the Moon 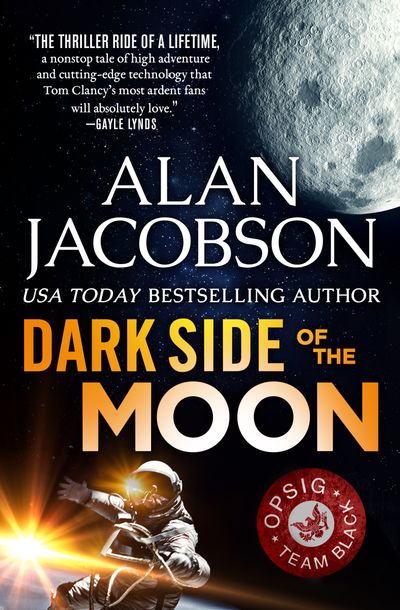 ALAN JACOBSON: When I approached you with the initial scene’s parameters, I had been told by Captain Jason Rubin (USMC) that the FA 18 was the proper jet to use. You agreed. But the way I envisioned the scene unfolding was difficult to pull off.

MOON MILHAM: You wanted to respect the military guys who actually work in this airspace, so to speak, which meant being technically accurate. And that meant the things you wanted to accomplish in the scene had to be feasible. We couldn’t exceed, or contradict, the plane’s capabilities, which your original idea would’ve done.

The FA 18 is a terrific fighter jet, filled with multiple redundant systems to get it back to the “boat” (I say that with great respect for Navy dudes!). However, the things that you wanted to have happen in those scenes were beyond the aircraft’s technical specs. Without giving away any spoilers, that meant you needed to re-think the construction of the scene, and how it had to unfold. And that meant we needed to do a lot more talking!

Yeah. A lot more. As I got into the scene, I realized this was going to be much more difficult to construct and pull off because of how these fighter jets operate and the procedures the Air Force follows. There are rules of the road, so to speak.

Most definitely. At each military base, the Department of Defense has worked out “standards” between military jet traffic and civilian/commercial traffic. These procedures are designed to reduce the workload between FAA controllers and the military, so that the FAA controllers can dedicate more time to general aviation. The airspace that the military conducts training in are Military Operating Areas or MOAs, Restricted Areas, Warning Areas, and defense of Prohibited Areas. Due to the nature of military training, we need airspaces that are at times free from ALL other general aviation. It may be when we’re flying at night with lights out, or we’re dropping ordnance (practice inert or live) to hone our skills for times of conflict.

The Temporary Flight Restricted (TFRs) areas are controlled by the FAA and NORAD, and are published in Notices to Airman (NOTAMs) to all pilots. Since 9/11, these TFRs have been a small thorn in the side of general aviation due to the unpredictability of placement and timing. TFRs help us protect large gatherings like the Super Bowl or World Series. Prohibited areas are just that, prohibited. Some, like the TFR over and around Washington, DC, are from the surface to infinity—meaning, it doesn’t matter how high you’re flying, you can’t fly there.

All of these procedures served as background—more like the foundation—for something significant that happens in Dark Side of the Moon. And it triggers all sorts of problems.

In my line of work, problems are helpful because problems lead to complications and complications are at the core of a good thriller! After our discussions, I was able to build the scenes the way I wanted, while respecting the rules of the road (or airspace)—and discovered your knowledge base far exceeded military jets. You oriented me about the spaceflight my characters were facing and taught me about launch trajectories and abort procedures, transponders, satellites, the military’s Deep Space Network, communication jamming, and NORAD’s private plane tracking. Where’d you amass this knowledge?

I’ve been fascinated with manned spaceflight since I was five years old. My hero was Ed White, Gemini 4 and Apollo 1 astronaut. White was the first man to walk in space. That was so cool. My dad took me to Chicago in the summer of 1966 where I had the opportunity to get his autograph. That he was an Air Force fighter pilot before becoming an astronaut made up my mind as to what I wanted to be when I grew up. And like White, I also became a member of the 22nd Fighter Squadron at Spangdahlem AB Germany.

The Apollo program was my college prep assignment, so I became very well versed in spaceflight and the math required to launch and achieve orbit, the concepts of the boost phase of translunar injection and lunar insertion, the return to Earth via trans-Earth injection, reentry, and of course splash down. I was happy to lend all my knowledge to you on each of these for Dark Side of The Moon.

It proved extremely helpful and led to the next phase of my research with you. You said the best way to understand what my characters are experiencing was to fly one of these jets—in a simulator, which you arranged for me at the 162 Wing, Arizona Air National Guard. It gave me a sense of what it feels like to maneuver one of these machines, and to experience the sensation of flying. I know that what happens in the simulator stays in the simulator, but I think I did pretty well, don't you?

The F-16 simulator familiarization sortie was perfect to have you experience all that is going on during a mission. Not to simply fly the jet, miss the near and far rocks, but manage the sensors to employ air-to-air missiles, find the surface target, and employ ordnance to destroy the target, then get home safely. Oh wait, you didn’t get home safely! You crashed on landing.

Fine…yes, I crashed. I was doing pretty well—until I had to land. I pushed down instead of pulling up and crashed quite spectacularly. But a couple of months later, I had the opportunity to fly an F-35 simulator and did much better. I shot down an enemy fighter and landed successfully. Unfortunately, you were not there to see it! I also have to ask about the elephant in the room. My novel is entitled Dark Side of the Moon and your first name is Moon. Is your name really Moon?

Moon was shortened from “Moondawgie,” my given nickname, which one earns, as selected by his peers. Three decades ago, on a peninsula far, far, away, the “naming committee” had just watched the movie “Gidget Goes To The Beach.” The character Moondoggie fit me, but they wanted to make it sound more southern—hence, Moondawgie. As email was beginning in the military in 1990, everyone knew me by Moondawgie, or Moon. So to make it easier to find my name in the Global email list, I changed my first name to Moon. Years later, I made the change official (that is, legal).

A few years ago you had an unprecedented opportunity to meet one of your childhood heroes, Apollo 11 astronaut—and moonwalker—Buzz Aldrin.

Yes! In 1998, former fighter pilot Buzz Aldrin was the 52nd Fighter Wing’s guest speaker. When I met him, I stuck my hand out to shake and said, “Col. Aldrin, welcome to Germany. My name is Moon, but you can’t walk on me.”