After being away for several years, Charles Moray finds that a deadly, shocking surprise awaits him in England.

Charles Moray has finally returned to England, ready to settle down and put his family's affairs in order. He's spent the past four years in a self-imposed exile, nursing his broken heart while trekking across India and South America. Even so, Charles still carries a grudge—and a burning torch—for Margaret Langton, his so-called soul mate and the woman who refused to marry him.

In the following excerpt from Patricia Wentworth’s Grey Mask, Charles decides to take a peek at his neglected family estate before retiring for the night. As he moves through the house, he stews over Margaret and his loneliness, only to realize he isn't quite so alone after all. People seem to be talking in one of the upstairs rooms, and Charles is too curious not to listen in... So begins a mystery involving Charles' past, and a deadly conspiracy, that only Miss Maud Silver can solve.

Read on for an excerpt of Grey Mask, and then download the book. 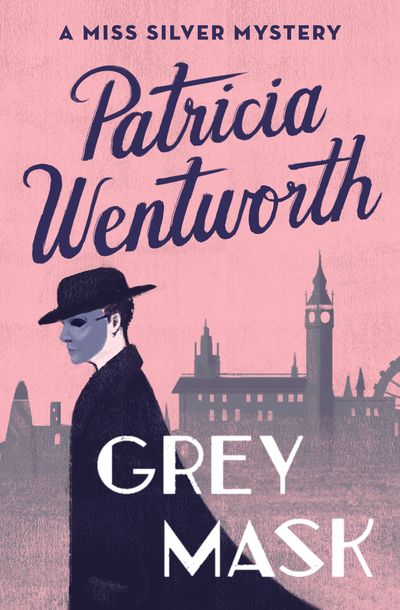 CHARLES MORAY LOOKED through the hole in the panelling and saw what surprised him very much. The room beyond was half in shadow and half in light. There was a lamp with a tilted shade on the rosewood table which held his mother’s photograph albums. It stood perched on the fattest album with its green silk shade tipped back so as to throw all the light towards the door.

Charles drew back instinctively lest he should be seen; but the ray fell away to the left of his panelling and was focused on the door across whose threshold he had seen the pencilled line of light.

There were two men sitting at the table. One of them had his back to Charles, who could see no more than a black overcoat and a felt hat. The other man was in the shadow facing him. Charles, peering and intrigued, beheld a white shirt front framed, as it were, in a sort of loose black cloak. Above the shirt front a blur, formless and featureless. Certainly the man had a head; but, as certainly, he seemed to have no face. However deep the shadow, you ought to be able to see the line where the hair meets the forehead, and the outline of the jaw.

Charles drew a longish breath. The man didn’t seem to have any hair or any jaw; he was just a shirt front and a cloak and a greyish blur that had no form or feature. It was rather beastly.

Then as he felt the short hairs on his neck begin to prickle, the man with his back to him said,

The shoulders under the black cloak were shrugged; a deep, soft voice gave an answer;

‘If there’s a certificate, so much the worse for the girl.’

‘What do you mean?’ The first man hurried over the question.

‘Why, she must go of course. I should think a street accident would be the safest way.’ The words were spoken with a gentle, indifferent inflexion. The man in the shadow lifted a paper, looked down at it with that blur of a face, and inquired, ‘You are sure there was no will?’

‘Oh, quite sure. The lawyer took care of that.’

‘There might have been a second one—millionaires have a curious passion for making wills.’

‘Twenty-seven was quite sure. Here’s his report. Will you look at it?’

A paper passed. The lamp was turned a little, the shade adjusted. Charles saw the light touch part of a hand, and saw that the hand wore a grey rubber glove. His heart gave a jump.

‘By gum! That’s what he’s got on his face too! Beastly! All over his face and head—grey rubber—a grey rubber mask!’

Want more mystery novels? Sign up for Murder & Mayhem's newsletter, and get our recommended reads delivered straight to your inbox.

The lamp was his mother’s reading lamp. The room, unused since her death, remained for Charles Moray a place of warmth and shaded light, a place where he mustn’t make a noise, a fire-lit evening place where he sat cross-legged on the floor beside a sofa and a soft, tired voice told him stories. What were these unbelievable people doing in this place? It made him feel rather sick to see the light slant from the reading-lamp across that grey, smooth hand on to the pages of Twenty-seven’s report; it made him very angry too. Of all the infernal cheek—

The pages turned with an even flick; Grey Mask was a quick reader. He dropped the report in a heap and said, in that deep purring voice,

The other man nodded.

‘Are you ready for him?’

Charles jerked back from his peep-hole. Someone had moved so near him that the recoil was instinctive. Coming cautiously forward again, he became aware that there was a third man in the room, away on his left, keeping guard over the door. When he stood close to the door he was out of sight; but when he opened it he came sufficiently forward to be visible as a blue serge suit and the sort of khaki muffler which everybody’s aunts turned out by the gross during the war. The muffler came up so high that the fellow was really only a suit of clothes and a scarf.

Through the open door there came a man who looked like a commercial traveller. He wore a large overcoat and a bowler hat. Charles never got a glimpse of his face. He walked up to the table with an air of assurance and looked about him for a chair.

There was no chair within reach, and under Grey Mask’s silent, unmoving stare some of the assurance seemed to evaporate. The stare was a very curious one, for the holes in the smooth grey face were not eye-shaped but square—small square holes like dark dice on a grey ground. They gave Charles himself an indescribable feeling of being watched.

Grey Mask tapped the sheets of the written report sharply.

‘Your report is too long. It leaves out essentials. There’s too much about you— not enough about the facts. For instance, you say the lawyer took care of the will. Did he destroy it?’

Twenty-seven hesitated. Charles suspected him of a desire to hedge.

‘Find out and report again. That’s essential. Then there’s another point. There was no certificate?’

‘Too much “you”,’ said Grey Mask. ‘Find out about that witness. You can go now.’

Want more mystery novels? Sign up for Murder & Mayhem's newsletter, and get our recommended reads delivered straight to your inbox.

The man went, looking over his shoulder as if he were expecting to be called back.

Charles did not see his face at all. He was cursing himself for a fool. He ought to have got downstairs before Twenty-seven. He had his plan all made, and he ought to have been attending to it instead of listening to the gentleman confessing his criminal activities. Twenty-seven would now get away, whereas if Charles had cut along the corridor and locked the door at the end of it, he might very well have had a bag of four waiting for the police.

At a very early stage of this interview his thoughts had dwelt hopefully on the fact, so much deplored by Mr Packer, that his telephone subscription had been kept going during those four years of absence.

Twenty-seven had faded—must fade if the other three were to be bagged. It was a pity; but perhaps the police would gather him in later. I’ll get along,’ said Charles; and as he said it, he heard the invisible man on his left move again. He moved and he said, in a whispering Cockney voice.

Grey Mask nodded. He had pushed Twenty-seven’s report across the table, and the other man was straightening the sheets and laying them tidily together.

There was the sound of the opening door. The blue serge suit and the khaki muffler bulged into view again, and, passing them, there came a straight black back and a close black cap with a long fold of black gauzy stuff that crossed the cap like a veil and hung down in two floating ends.

Charles received such a shock that the room went blank for a moment. He saw, and did not see; heard words, and made no sense of what he heard. He was within an ace of lurching sideways, and actually thrust out a hand to save his balance. The hand encountered the panelling against which his mother’s dresses used to hang. He kept it there pressed out against the cold wood, whilst with all his might he stared at the straight black back of Number 26 and told himself with a vehement iteration that this was not, and could not be, Margaret Langton.

The iteration died; the rushing sound that filled his ears dwindled. His hand pressed the wall. The blankness passed. He saw the room, with its familiar furnishings—the blue curtains, dark and shadowy; the faded carpet with the wreaths of blue flowers on a fawn-coloured ground; the table with the photograph albums and the lamp with its tilted shade. The ray of light crossing the room showed him the edge of the closing door. It passed out of sight and shut without a sound.

Charles saw the hands that were more familiar to him than any of the familiar things in the room which he had known ever since he had known anything at all. He looked at Margaret’s hands. He had always thought them the most beautiful hands that he had ever seen—not small or slender, but strong white hands, beautifully formed, cool and alive to the touch. The hands were quite bare. He had made sure that Margaret was married, but there was no wedding ring on the finger that had worn his square emerald.

As he saw these things he became aware that Margaret was speaking, her voice so very low that the sound barely reached him and the words did not reach him at all. She stood holding the edge of the table and speaking in that low voice; and then with a quick movement she turned and came back along the ray of light to the door, which swung open to pass her through. The light was at her back. The scarf with the floating ends veiled her face. She moved with her old free step and the little swing of the shoulders that he knew by heart. She held up her head. The ends of the scarf moved behind her. She passed through the door and was gone. The door shut.

Charles drew a very long breath. He had not seen her face.