Martinis and Murder on a Space Cruise Ship: A Conversation with Mary Robinette Kowal

There's been a murder—in space.

It’s Dashiell Hammett’s The Thin Man in space. That’s how Hugo-award-winning author Mary Robinette Kowal’s newest book, The Spare Man, was introduced to me. And boy, does it deliver.

Newlyweds Tesla Crane and Shal Steward are traveling incognito on their honeymoon to Mars. She’s an heiress and an engineer and Shal is a retired detective. But when they stumble on a body on the ship, all fingers point to Shal as the culprit. With her service dog, Gimlet, Tesla has to save her spouse and find the actual killer.

In addition to writing the delightful newlywed murder mystery, The Spare Man, Kowal is a writer who won the Hugo, Nebula, and Locus awards for The Calculating Stars (in the Lady Astronaut series) as well as narrating audiobooks for sci-fi/fantasy writers like Seanan McGuire and John Scalzi. She’s also a professional puppeteer.

It gives Murder & Mayhem great pleasure to talk with Kowal about her newest book.

We have edited this interview for length and clarity.

The Thin Man: How Dashiell Hammett’s Life as a Private Eye Inspired his Crime Fiction Classics

What inspired you to write this book? Are you a big fan of Dashiell Hammett?

I'm a big fan of the Thin Man movies. I have seen all of the movies and I’ve read part of the book. I’ve discovered that the thing that I am drawn to is the William Powell and Myrna Loy chemistry.  I love a mystery that is being solved by a happily married couple that trusts each other. I love the sparkle and banter. And because I'm a science fiction writer, I also wanted it in space. I’ve also done a bunch of writing workshops on cruise ships, hence why it's on a luxury space cruise liner.

Each chapter starts with an epigram describing a drink. Could you talk about why you made that choice? It sort of felt that there was a connection between the drink and the chapter?

For the most part, I did try to have a link between the name of the drink and something that was going on in the chapter, whether it was they are going to consume this cocktail in this chapter, or in the Death in the Afternoon chapter: Hello, it's the afternoon and there's a death. So I did that, because in the Thin Man movies, they do drink constantly, it was right at the end of Prohibition.

I think it's probably a holdover from Prohibition. We associate this fanciness with cocktails, and especially ones at inappropriate times of the day.

One of the decisions that I made was starting the first chapter with the martini because when you are introduced to Nick Charles in the film, [he’s] making a martini. The other reason that they are actually recipes rather than just names of recipes is that when I was working on it, some of my Beta readers didn't drink. They were like: “I don't know what a martini is.”

I realized that in order for them to feel included, especially when I started to get into more obscure cocktail names that I needed to include the recipes. Then because I ran out of useful cocktail names and had to invent additional cocktails, it became very handy that I could [say] “This is obviously a cocktail.” It’s one that I made up but yes, “Magician's Nibling” is definitely a cocktail.

I was reading through your acknowledgments, and it mentioned that you had worked with experts to figure out the physics of the ship, etc. Could you talk about that?

I generally knew how I wanted to ship to work because of the research I had already done for the Lady Astronaut books.  I had a reasonable understanding of how centrifugal force is created in artificial gravity and the Coriolis effect, but there were a number of things that I could do.

Since I had a rocket engineer that I've been talking to already, I went to him and he made this massive spreadsheet of the ship. He needed to know the dimensions of the ship so that we could talk about transit times, and rate of thrust. [One thing we assumed is that] they have solved energy problems, I have no idea how that ship is powered; that technology has not been invented yet.

Working with [a rocket scientist] gives me opportunities for more problems [for my characters]. I knew that the Coriolis effect would be more pronounced, the closer you got to the center [of the ship]. What I didn't know is that the floor itself would wind up being somewhat uneven, in order to always keep “down” in the right direction for you. It was this really interesting opportunity to make things worse for my character because she has mobility issues.

This [spreadsheet] gives me transit time. Because they're traveling under constant thrust, the distance between Earth and the ship changes dramatically. So I know what time of day each chapter happens so I could tell the number of light minutes and what the lag time was for each.

I could definitely have written this where communication is always instantaneous. Anytime I can be scientifically accurate, I think it makes the story more interesting, because it introduces these constraints and problems that the characters have to work around.

The other piece for me is that I know that so many people learn their science and their history from the media. I feel like there's a certain responsibility to try to represent things accurately when I can. On the other hand, I do fudge things. The distance between levels on the ship is 50 yards and I'm treating it much more like it's 50 feet. 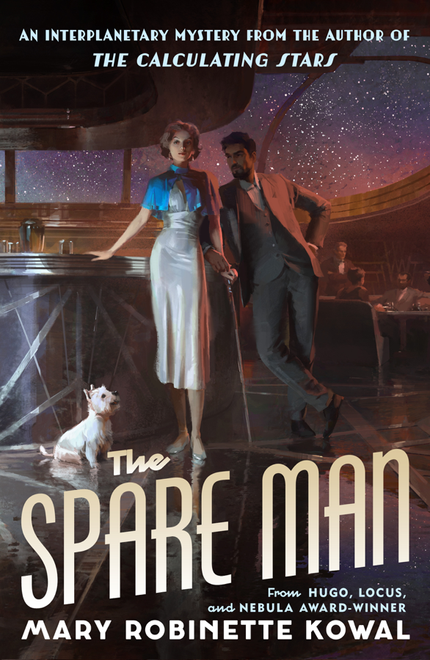 One thing I noticed was how front and center people’s pronouns were in the book. Could you talk about that decision?

On some of these Zoom calls we just have [our pronouns] displayed right here [on the screen]. But the other thing is that on panels that I'm on now, it's very common to say, “My name is Mary Robinette, Kowal (she, her).” Evolution happens in language constantly. So one of the things I believe with science fiction is that we aren't predicting the future so much as we are trying to model the futures that we want to see.

It's very natural for [Gen Z] to check in about people's pronouns. It's like why wouldn't that just become part of common etiquette? It also used to be deeply rude to not use a to refer to someone by their "Christian" (or given) name.

Thank you to Mary Robinette Kowal for her wonderful book and conversation!