Get Inspired by Agatha Christie with This Exciting New YA Book

A fresh look at the Queen of Crime.

By Kathleen Glasgow and Liz Lawson 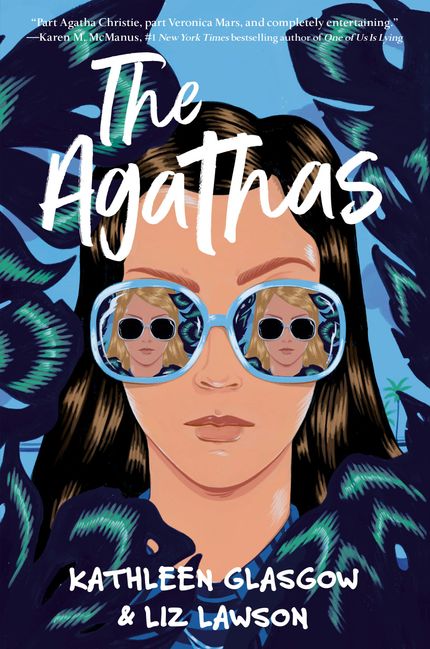 How did you end up writing this joint murder mystery?

Liz Lawson: My first book came out on April 7th 2020 and so it was not the best time to have a book release. A lot of the things that I was hoping would happen for it got canceled and it was disappointing.  Before that, Kathleen and I had thrown around a very vague idea of writing a mystery, because we thought it would be fun and different. We wouldn't be making people cry.

Once COVID kind of hit, the idea became more serious. We started talking more regularly about it and we started throwing around more details. We were both isolated from most people and so we decided to just start trading chapters. I don't think we had some great plan for it at the start. Then we wrote about 100 pages.

Kathleen Glasgow: She and I write primarily contemporary, realistic fiction that tends to be on the sadder side. Our topics are a little darker. Liz was a big Agatha Christie fan and I am a big true crime fan.

There were two of us, it seemed natural that it would be a dual point of view novel. Liz is Alice and I’m Iris.  She would write an Alice chapter and send it to me. Then I would really quickly write like the corresponding Iris chapter.

Because being a writer is kind of lonely, because [it’s just] you and the words on the laptop or notebook. It was really nice to write with someone, and to have created the story with someone else, because then they're in it with you.

We share an editor at Delacorte who didn't know what we were doing. So we didn't have any pressure on us. That's when I found out that Liz was really much more like Alice than I had thought because she was really devious and had already told her agent what we had done. Her agent was like, “This sounds great. We should show it to your editor.”

I was like she's not gonna buy that from us. Then our editor was like, “I love it.”

Lawson: I do like to say that the book is really a friendship story wrapped in a mystery. I feel the proudest of that aspect of the book. It's a character-driven book, and even Alice and Iris don't do things correctly, because they're not good at their jobs. We wanted that to be clear. They use tips and things from Agatha Christie novels, but they're just teenagers. They have homework and they have their own family problems. We wanted to keep them real and make their burgeoning friendship the backbone of the story.

One theme in the book is how no one listens to teenage girls. Can you talk about that?

Glasgow: That was one of the things that we wanted to put in the novel was how the intellectual capability of teenage girls is often derided. That is a strong theme in the novel with the police not believing them, and sort of dismissing everything, like “She probably just ran away, Alice, because teenage girls are so emotional, and she just wants to teach everyone a lesson, just like you did.” Iris has a really powerful male figure in her life who is tormenting her. So they have this weight looming over them of older, male figures, not believing them or actively wanting to hurt them.

Once you come into a certain consciousness, you realize that men are going to see you a certain way. That's a really jarring moment in your life when you realize you're going to have to work so much harder to be believed and to get what you want out of life because there's a certain section of society that thinks that you aren’t worthy, smart, or creative.

Lawson: I like what Liz did with Alice because on the surface, you would think that Alice is just this snobby popular girl without a thought in her head. But she's really smart and she loves Agatha Christie novels. She found who she wanted to be through reading stories about smart, capable people written by a very smart, capable woman who underwent an amazing disappearing act of her own that Alice took inspiration from. I love that the novel starts with Alice, imitating Agatha Christie's real-life disappearance.

It’s also fascinating that you chose Agatha Christie who created Miss Marple who is underestimated because she’s an elderly woman.

Lawson: It was definitely something we talked about how both older women and younger women, particularly teens tend to be ignored. That theme runs through the book, and they use it to their benefit, which they kind of turned on their head.

Glasgow: Your invisibility becomes a talent.

By Kathleen Glasgow and Liz Lawson