A Powerful New Mystery Set Under the Australian Sun

Under the blazing sun of the Australian Outback, it only takes a few hours for an unprepared traveler to succumb to the elements. In The Lost Man, Jane Harper's latest mystery thriller, two brothers find their third sibling dead of dehydration under these harsh conditions. Yet the circumstances surrounding his death are perplexing, prompting suspicions of foul play—and the desolate wilderness of the Outback drastically narrows the pool of suspects.

The Lost Man is crime fiction author Jane Harper’s latest addition to her thrilling brand of Aussie noir, in which the landscape of the continent is nearly as dangerous as the criminal investigations that unfold there. You may recognize Harper as the author of Force of Nature (2017) and The Dry (2016)—which earned her a CWA Gold Dagger, made the New York Times bestseller list, and has been optioned for a film by Reese Witherspoon. “A nuanced but pulse-pounding thriller,” The Lost Man further solidifies Harper’s reputation as a force to be reckoned with in crime fiction (Entertainment Weekly).

Harper’s newest release takes place in an isolated stretch of the Outback, where the three Bright brothers have carved out lives for themselves by raising cattle. Eldest brother Nathan has his own homestead miles away, and hasn’t seen his siblings in months—the result of family tension that has stretched on for years. When he finally reunites with his brother Bub, it isn’t under happy circumstances. They meet at the borders of their respective properties, where the body of their middle brother Cameron lies in the dirt. Cameron apparently sought out the stockman’s grave—a historic site rife with urban legend, and the only shade for miles around—before fatally collapsing.

The mystery began one scorching December morning, when Cameron headed out on a routine expedition and never came back. Having lived in the Outback his entire life, Cameron was not one to be unprepared for the harsh climate. His fully functional vehicle was found stocked with enough food, water, and fuel to last him weeks. But he abandoned his trusty four-wheel-drive on a rocky outcrop and struck out on foot. So who—or what—beckoned Cameron out to the middle of nowhere?

Want more Aussie noir? Sign up for Murder & Mayhem's newsletter, and get our thrilling recommendations delivered straight to your inbox.

It’s a mystery that Nathan is determined to unravel. A three hour’s drive away, Nathan was Cameron’s closest neighbor, and he knows this unforgiving land like the back of his hand. As the members of the Bright family grieve and struggle to put their lives back together, Nathan tries to let bygones be bygones, knowing that he’s their best chance at untangling Cameron’s perplexing death. With the help of his teenage son, Nathan starts asking the tough questions. But Cameron was widely loved—both within the family and the ranks of the nearby town—and people are reluctant to speak ill of someone who just passed away. The more he learns about Cameron’s bizarre behavior before he died, the more Nathan threatens to reopen old family wounds and stir up rifts that have divided their isolated community for years.

If the Bright family expected this tragedy to bring them closer together, they soon learn that forgiving past transgressions won’t be so simple.

With a relentless pace and compelling narrative, The Lost Man simply cannot be passed up by mystery and thriller fans. The novel has twists and turns aplenty, but what makes it a must-read this winter is Harper's vivid evocation of the Australian Outback. She brings the landscape to life in all its deceptive beauty, loneliness, and hidden dangers, from the oppressive heat to the skulking wildlife. The result is a novel humming with suspense, with an atmosphere “so thick you can taste the red-clay dust, and the folklore surrounding the mysterious stockman adds an additional edge to an already dark and intense narrative” (Booklist).

So what are you waiting for? Check out The Lost Man today and get your hands on the latest and greatest in Aussie noir.

You just found your next thrilling read. Check out Jane Harper's The Lost Man! 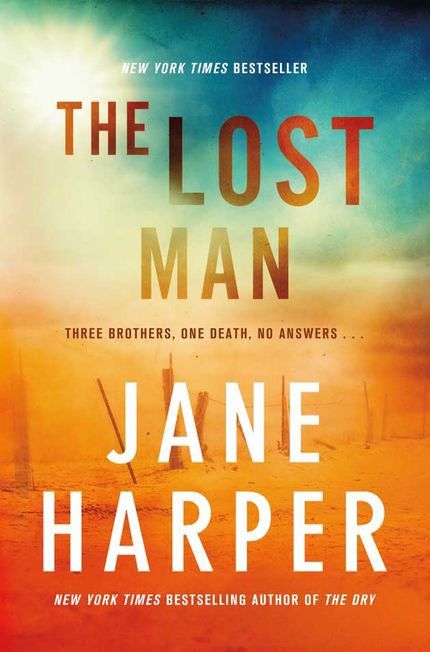 In The Lost Man, Jane Harper delivers a “crime masterpiece. The landscape and culture of this remote Australian territory are magnificently evoked as a story of family secrets unfolds. Rarely does a puzzle so complicated fit together perfectly―you’ll be shaking your head in amazement.” ―People

Want more Aussie noir? Sign up for Murder & Mayhem's newsletter, and get our thrilling recommendations delivered straight to your inbox.

This post is sponsored by Flatiron Books. Thank you for supporting our partners, who make it possible for Murder & Mayhem to continue publishing the mystery stories you love.