See where the world's most famous detective got his start ... and almost met his untimely end.

Were mystery fans ready for the death of Sherlock Holmes? In 1893, Sir Arthur Conan Doyle believed that they were.

It was during this year that Doyle published "The Final Problem". The short story concluded with the seeming demise of Sherlock Holmes. The tale begins with the discovery of a secret criminal organization sweeping across England. The criminal genius behind the enterprise? Holmes' archnemesis Moriarity.

Holmes and Watson track Moriarty by rail across England and onto mainland Europe. The short story concludes at Switzerland's Reichenbach Falls. Dr. John Watson, racing to assist Holmes in Holmes' fight against Moriarty, clambers up the cliffs. At the end of a perilous trail overlooking the falls, he discovers signs of a struggle, but no sight of Holmes or Moriarty. With a heavy heart, Watson concludes that the sleuth has plummeted to his doom while locked in mortal combat with Moriarty.

Doyle had published a number of successful Holmes tales between 1887 and 1893. By 1893, he was ready to move on to a new literary project. It seems, however, his readers were not. Fans were devastated by Sherlock's death, and demanded his return. A few years later, Doyle would acquiesce to the demands of his readership and resurrect the good detective.

Today, readers have a wide variety of Sherlock Holmes novels and short story collections from which to choose—but none, perhaps, are as captivating as this legendary collection. First published in 1893, the stories found within The Memoirs of Sherlock Holmes track Holmes from the incredible heights of his deductive powers to the dark bottom of that Swiss gorge. Each of the eleven tales included here were originally published in The Strand Magazine, and are now viewed as crime fiction classics.

In “The Greek Interpreter,” readers are introduced to Holmes' older brother, Mycroft. The brilliant siblings join forces to put an end to a sinister extortion scheme. In “Silver Blaze,” one of the most popular Sherlock Holmes stories and the case that depends upon the “curious incident of the dog in the night-time,” Holmes tracks down a missing racehorse on the eve of an important race. Most famously, The Memoirs of Sherlock Holmes ends with "The Final Problem" at the perilous cliffs of Reichenbach Falls, and with the final words of Dr. Watson as he mourns the seeming death of his good friend: Holmes was "the best and the wisest man whom I have ever known."

Also found within the pages of The Memoirs of Sherlock Holmes are classics like "The Crooked Man," "The Reigate Puzzle," and "The Resident Patient." This edition also includes an illuminating introduction by Otto Penzler. Sir Arthur Conan Doyle intended to close the book on his famed literary sleuth with The Memoirs of Sherlock Holmes. Yet read any of the riveting tales found within Memoirs, and it's clear that Holmes was not ready to go quietly into the night. 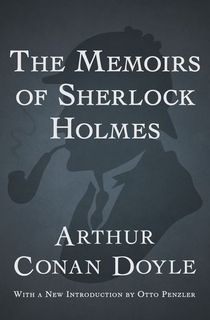