A little dab'll do ya.

In Dr. Neil Bradbury’s A Taste for Poison, which publishes on October 19, 2021, he explores the history and science of 11 poisonous substances. Dr. Bradbury, professor, scientist, and writer, tells true crime stories of each poison as well as how the poison disrupts the normal functions of the body. It’s a delightful and informative read for anyone who is fascinated by the world of poisons—and this includes virtually anyone who is a murder mystery or true crime aficionado.

Murder & Mayhem had the opportunity to talk with Dr. Bradbury about his work. Below, read our interview with an author who truly understands the power of poison. 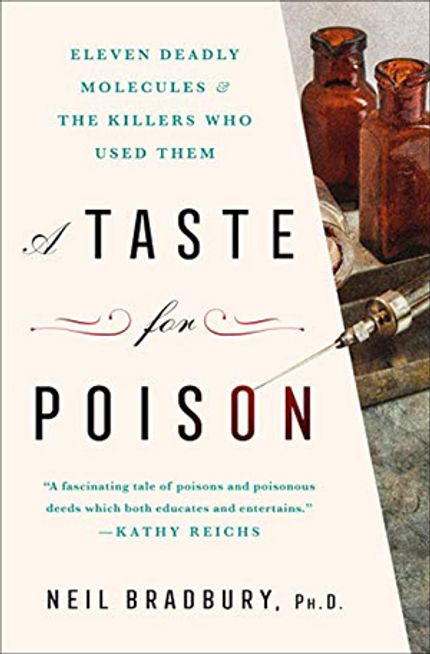 Murder & Mayhem: What made you decide to write this book? What drew you to the particular subject?

Dr. Neil Bradbury: I'm obviously a scientist and medical school professor, so I've always been interested in science and a bit of a science geek. But I've always been interested in mysteries as well. So this seemed an obvious marriage between those two passions in my life. And looking through things, I found it really hard to find the kind of book that I wanted to read about the topic. And so not being able to find it, I decided to write one myself.

As a student of biochemistry as an undergraduate student, I spent all my time learning about the effects of different chemicals on the body. But there was actually one class…[where] they mentioned a chemical called Bongkrekic Acid, which pretty much nobody's ever heard of. As the professor was going through the effects on cells and tissues on it, I just thought, “I wonder if that could be used for murder, and no one's ever heard of it.” Could you get away with it, since no one's ever heard of it? That's kind of been percolating in the back of my mind ever since then.

Nowadays, I try to include murders and poisonings in all my classes, as a way to give a different spin on what's going on. But I think it really does give an interesting perspective on just how the body works, and how you could interfere with the body. I guess it has been a lifelong interest of mine.

Many of the stories that I presented in class are included in the book. Now, obviously, the book is not intended for anybody reading it to end up with a medical degree. I did want it to be something that people who are interested in mysteries and science would enjoy reading, and also include a little bit of history as well.

Why do you think people are so fascinated with poisons?

I think it's certainly something that resonates with everybody on a deep level. Most of us grew up with the stories of Snow White eating the poisoned apple. I think there's that kind of almost cultural curiosity.

But I think there's also some sense that poisons are almost magical. [When] we think about someone being hit over the head with a baseball bat or a tire iron, that's pretty obvious how that would kill someone. But when you're talking about poisons, you're really talking about just a few grains of a little white powder that looks totally innocuous, but can kill you, oftentimes rather quickly.

It's also the fact that you can give someone a poison, and actually then be quite a distance away from the victim before they may succumb to it. So in terms of certainly murder mysteries, when the person dies, the murder can be several thousand miles away at the time of the death, but yet still be responsible for the death.

But different poisons will kill in quite different ways. And oftentimes the precise symptoms that a person would have when they're experiencing being poisoned can actually be quite useful in determining what they've been exposed to. One of the stories that I tell is a poisoning that occurred in Scotland. One of the victims was married to an anesthesiologist who immediately recognized the symptoms and was able to save his wife and son from dying from the poison, because he recognized those specific symptoms.

You did an incredible job communicating biological functions that the poisons impacted. Why was this important for the book?

I think that there really is a genuine interest in learning how poisons work and how they affect the body. People are generally interested in how the body works as well.

This is how the body normally works and it usually works pretty darn well. But if you put these poisons in, it can disrupt things. And also to really give some exposure to the fact that whilst we generally think of poisons as something nasty, something terrible, they are just chemicals at the end of the day, and they're not really good or bad. It's just how you use them. I'm thinking of people like [serial killer nurse] Charles Cullen, who used digoxin, which is a really important medicine in treating heart complaints. But if you abuse it, you can kill someone.

I also wanted to get across that there are these two sides of the coin as well. And oftentimes, some poisons contain drugs that can be used to treat other poisons. One of the things that I bring out in the book is that atropine on its own, if you take it in higher levels, will kill you. But I think also it came out in prominence just recently with the attempted assassinations of the Russian double agents in England in Salisbury. I guess just about 18 months ago, when they were poisoned with nerve agents, it turns out that one of the best antidotes for that is atropine.

How did you decide which poisons to include in your book? There’s a lot of poisons out there to choose from.

Trying to narrow those down was quite difficult. Obviously, you've got to cover the big three (arsenic, cyanide, and strychnine). I wanted to pick out those poisons that really did illustrate the fact that they operate in different ways. Some poisons attack the nerves. Other poisons will attack the heart and stop it from beating. Other poisons will pretty much destroy the protein production inside every cell. I didn't want to come up with a whole series of poisons that all just worked in the same way.

I also wanted to find poisons that had really good stories associated with them, if I can say that a murder is a good story. How many times will you come across a story where someone had been poisoned in chicken curry?

Related: 11 Culinary Cozy Mysteries Bursting with Recipes for You to Try Out

What mysteries do you like to read? I presume Agatha Christie is one of them.

Obviously I read a lot of Agatha Christie growing up. That was certainly my main interest. [Also I read] the classic ones like Sherlock Holmes, who also included several poisons in some of his stories, and obviously other classics. I was more focused on British writers at the time. So people like Ruth Rendell...and also P.D. James, who I will admit, I kind of stole the title for my book from. She had written a book called A Taste for Death. So I admit, I somewhat purloined part of her title to put mine for A Taste For Poison.

It certainly should be known that it's really difficult to get away with poisoning someone these days. The ability to detect even fairly exotic poisons has come in leaps and bounds since early times, and now it's pretty much impossible to come up with a poison that can't be detected. So if you're going to kill someone, probably poisoning is not the best way. Although in murder mystery books, you're free to run the gamut.

To learn more about the stories and science of poison, check out A Taste of Poison, out this October!