All about the "murderous renegade" who shaped the spy genre.

The 1903 novel The Riddle of the Sands established the blueprint for espionage fiction. Its author, Erskine Childers, lived a daredevil life and died in front of an Irish firing squad 100 years ago this month.

Best-selling author Ken Follet called Erskine Childer’s The Riddle of the Sands “The first modern thriller”. It’s a book that did more than any other to define “spy novels” and would influence everyone from John Buchan to John Le Carre. Without Childers, there would be no Richard Hannay, George Smiley—or even James Bond.

In The Riddle of the Sands two upper-crust English yachtsmen, Charles Carruthers and Arthur Davies embark on a duck-shooting expedition in northern Germany. They stumble across a German plot to invade Britain. Rumbled by the Kaiser’s navy, they escape by sailing their little yacht through treacherous waters often in deep fog, all the while stalked by a ruthless enemy.

The novel is a page-turner, filled with tension, action, and suspense. But what marks this Victorian ripping yarn out as a genuine departure from, say, the work of Arthur Conan Doyle, is the wealth of factual detail. Childers’ book is not only grounded in a real place (in this case the Frisian Islands), it is also built around the sort of technical information and insider jargon that would come to define espionage fiction. Carruthers and Davies’ adventure is utterly convincing because the author has a deep-rooted knowledge of sailing and navigation and the murky world of secret agents. In The Riddle of the Sands nobody is quite who they seem to be. It is a description that might also have been applied to the author himself.

The Riddle of the Sands 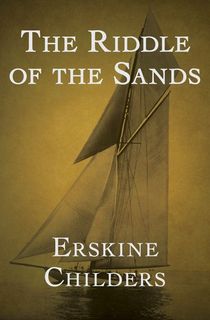 Erskine Childers was born in London in 1870, but brought up in County Wicklow, Ireland. A sickly boy, he took up sailing for exercise and fresh sea air. He soon became an expert yachtsman, sailing his thirty-foot cutter Vixen around Europe. The detailed logbooks of his 1897 trip to northern Germany would provide the background for his great thriller.

Like the two protagonists of The Riddle of the Sands, Childers was educated at English boarding schools and Cambridge University. He served as a clerk in the Houses of Parliament in London and served in the British Army in the Second Boer War. On his return home from South Africa he wrote The Riddle of the Sands. The book, with its critical (and accurate) warning of Britain’s vulnerability to a naval attack from the north, was an instant success. Not only that, it helped shape British defence policy.

Childers was a “casual” in the world of intelligence. While never a full-time spy, he used his frequent sailing holidays as a means of gathering information about foreign ports and coastal defences for the Royal Navy intelligence service. It was this insider knowledge that gives The Riddle in the Sands its sense of authenticity.

He might have written more thrillers, but politics and war intervened. Childers’ wife, Molly Alden, was an Irish-American from Boston with strong nationalist views. The author too had become increasingly disillusioned with British policy in Ireland and soon joined the struggle for independence. He became a divided man—a lover of England who was also an Irish Republican.

In 1914 Childers smuggled 900 rifles and 20,000 rounds of ammunition from Hamburg to Ireland on his yacht Asgard for use by rebel soldiers. Yet two years later won a medal for gallantry while serving in the Royal Navy defending Great Britain.  He numbered himself a captain in the IRA and also considered Edward Marsh, private secretary to Winston Churchill, his closest friend. The contradictions of his life would ultimately destroy him.

The Anglo-Irish Treaty in 1921 saw Ireland partitioned. The southern portion becoming the self-governing Irish Free State (now the Republic of Ireland) while the northern counties remained part of the British Empire. To hard-core Republicans such as Childers this compromise was a sell-out. They refused to recognise the treaty. The result was a murderous civil war.

While Winston Churchill denounced Childers as “a murderous renegade” and enemy of the British state, suspicion about him was also roused on both sides of the Irish divide. There were those in the government of the Free State who believed he was a British agent provocateur stirring up trouble to destabilise the fledgling nation.

Meanwhile, many in the IRA denounced Childers as a “bloody Englishman” and refused to deal with him. To these Republicans the ease with which Childers had sailed through the English Channel with his cargo of guns in 1914 seemed a little suspicious. Was he just a brilliant sailor? Or had the British Government colluded in the escapade to establish his “legend” with the Irish rebels and insert a spy into the independence movement? There were those in Ireland who hailed Childers as “The Irish Lawrence of Arabia”, while to many others he was nothing more than a cold-hearted traitor.

The truth will likely never be categorically established, but in the mayhem of the Civil War, suspicion quickly became certainty. Hunted by the Irish National Army and shunned by Republicans, Childers lived a fugitive existence. His English heroes Carruthers and Davies had outwitted their pursuers. The author could not escape his. He was arrested by Free State forces in County Wicklow and charged with possession of a firearm. Tried and found guilty, Childers was executed by a fifteen man firing squad from the Irish National Army at Beggar’s Bush Barracks, Dublin on November 24, 1922. His final words, or so legend has it: “Take a step nearer, lads. It will be easier that way”.