This Colorful Cozy Mystery Offers Both Entertainment and Intrigue

In The Coloring Crook, an immeasurably valuable coloring book leads to death.

Looking for a new cozy to dive into? The Pen & Ink mysteries, which center on a group of coloring book enthusiasts, continue to delight beyond their colorable covers. Protagonist Florrie Fox is the manager of Color Me Read, a D.C. bookstore owned by Professor John Maxwell.

Want more cozies? Sign up for Murder & Mayhem's newsletter, and get our recommended reads delivered straight to your inbox.

In her first adventure, Florrie investigated the suspicious death of Professor Maxwell’s abhorrent nephew, who was supposed to move into Florrie’s own apartment. Now, fully settled into her new role at Color Me Read, Florrie has created a coloring club for herself and her many friends. Working on her own adult coloring book about gardens, Florrie’s own expertise on coloring makes her the perfect person to run such a delightful gathering.

But when Dolly Cavanaugh, a member of the coloring club, discovers a copy of the first-ever coloring book, murder ensues—forcing Florrie to put her detective skills to use once more. This charming cozy is beautifully plotted and filled with characters as lifelike as your dearest friends. Krista Davis’s third cozy series is set to become her most beloved yet.

SPECIAL NOTE: The Coloring Crook, by Krista Davis, will be included in the first 20 new orders of January's episode of The Murder Chronicles! Order by December 20 to get your new release mystery book alongside the immersive mystery sensation. 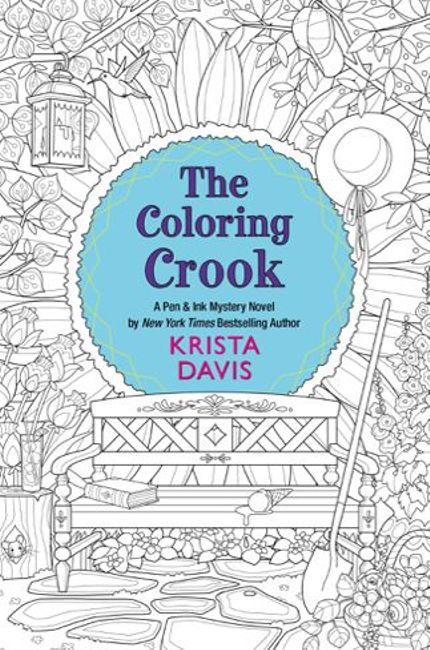 “Dolly!” I shouted. I dropped her purse and rushed to her. Kneeling, I bent over her. “Dolly, what happened? Are you okay?”

I could hear Veronica calling 911 behind me.

Dolly’s lovely face was contorted as if she was in pain. Her eyes were open, but they didn’t appear to see anything.

While Veronica spoke to the dispatcher, I gently massaged Dolly’s arm, unsure whether she could feel my hand.

“They want to know if she’s breathing,” said Veronica.

I watched Dolly’s chest but couldn’t tell if it was moving. “Dolly! Dolly, can you hear me?” I grasped the hand close to her chest. “Squeeze my hand if you can hear me.”

Her fingers twitched so imperceptibly that I wondered if I had imagined it. “Veronica, I think she moved.”

“They want me to stay on the line with them,” said Veronica. “No, I don’t see any blood.”

I watched her chest for any sign of movement. “I can’t tell. Dolly? Can you give me a sign? Can you blink?”

Veronica spoke softly but there was an urgency in her tone. “The door. It’s open!”

The French door leading to the backyard was open and moved gently in a breeze. Beyond it, a lantern flickered on a table on the enclosed patio.

I jumped up and looked outside. I didn’t see anyone. The romantic light from the lantern revealed three champagne glasses and a bottle of bubbly. I stepped out and checked the latch on the gate. I opened it and by the light of the moon, I could see the dark shadow of a figure running in the alley.

I was not a runner at all, but I tried. As I loped along, I knew full well that I wouldn’t make it to the street in time to see the person before he disappeared into the night. Veronica, who thought sports involving running were fun, might have been able to catch up to the person. Panting like a worn-out dog, I stopped when I reached the sidewalk. I looked to the left. The street lay peaceful and quiet. Shade trees lined the sidewalks and beautiful old homes stood in a stately row.

Still trying to catch my breath, I stumbled back to Dolly’s house in haste. I banged my knee on the gate and limped into Dolly’s living room. She hadn’t moved.

Veronica crouched beside her, murmuring comforting words of encouragement. I kneeled on the other side of Dolly. Veronica whispered to me, “I saw her eyelids flutter. I know I did.”

I didn’t want to, but I slid my hand under the collar of her blouse and felt for a pulse. I didn’t find one. “Her skin is warm,” I uttered hopefully.

I leaned toward her. “Dolly? Dolly!” Ever so gently, I shook her shoulder.

A commotion at the front door caused me to look up. Three emergency medical technicians strode in.Veronica and I rose and moved away from Dolly, making room for the two EMTs that immediately assessed her.

The third one asked us what happened. I was explaining when I heard my name. “Florrie?” Even without seeing him, I knew immediately who it was. My relationship with Sergeant Eric Jonquille was still new enough for me to tingle at the sound of his voice. I turned in haste.

The first time I had seen Eric, I was certain he was out of my league. After all, I was sort of mousey, not a bombshell like Veronica. But for some reason, I had gotten lucky with Eric. His chestnut hair tumbled in loose curls, and he had the most vibrant blue eyes I had ever seen. They were truly the shade of delphinium flowers.

“Eric!” I explained to both of them how we happened to be there and that we had found Dolly.

Eric and the EMT looked over at the purse I had dropped, and I realized that a tiny thing like that verified our story.

One of the EMTs on the floor was doing CPR on Dolly.

Eric coaxed Veronica and me out of the way of the EMTs. “Are you two okay?” Eric asked.

Tears welled in my eyes. “We will be if Dolly is all right. What on earth could have happened to her?” I wiped my tears away ferociously but more sprang up in their place. I sniffled, and Eric wrapped an arm around me. He slung his other arm around Veronica.

“The doors were open,” Veronica said, pointing toward the French door. “The front door was open and the door to the garden was open.”

“I ran outside and saw someone running along the alley. He turned the corner at the end of the alley.”

“Did you recognize the person?”

“I couldn’t even tell if it was a man or a woman. Whoever it was turned left.”

Eric frowned at me. “Did you see him leaving Dolly’s garden?”

“So you don’t really know that he had been here?” The EMT who had been doing CPR looked up at us and shook his head. “It was probably a heart attack.”

Another EMT rose to his feet and handed something to Eric. “She was holding this in the fingers of her outstretched hand.”

It was a brittle scrap of paper that was yellowed with age. Eric shrugged.

He pulled a tissue from his pocket, laid it on his palm, and placed the scrap of paper on top of it.

It was a tiny triangle, maybe two inches on the longest side.

It appeared to be the bottom corner of a page that had torn off. I knew instantly what it was—a corner of a page from The Florist. I sucked in a sharp breath and peered at it more closely to be sure.

“Does this mean something to you?” asked Eric.

I told him about the valuable coloring book Dolly had scored at the Dumont yard sale.

“Published in 1700? Are you kidding me?” His brow furrowed, and he gazed around. “Do you see it? Is anything out of place?”

He was scanning the room, taking in every little detail.

Want more cozies? Sign up for Murder & Mayhem's newsletter, and get our recommended reads delivered straight to your inbox.

Dolly’s apartment was decorated to the hilt. A stranger might have called it fussy. But I knew the truth. The items that cluttered the room so that the eye didn’t know where to land were all Dolly’s treasures. Louis the fifteenth and sixteenth chairs bore mismatched upholstery, yet they seemed to fit together in Dolly’s eclectic style.

Bookshelves lined two walls. Books packed the shelves, standing and in piles. More books stood in stacks on the floor. Paintings hung all the way to the high ceiling and even on the woodwork between the bookshelves. The zebra pattern settee was where I usually sat when she insisted I stay a few minutes for a cup of tea and a pastry. She used a round tufted ottoman as a coffee table, moving it about as needed. The ivory velvet fabric of the ottoman was a calm oasis in the middle of the cacophony of colors and patterns in the room.

As far as I could tell, it didn’t look any different than it usually did. That didn’t mean a book or some other new tchotchke that I didn’t know she had acquired wasn’t missing. She had amassed an astounding number of objects, but the only two I knew much about were the rare coloring book and the piece of coral. “Veronica, do you have the coral?”

“It’s in my bag.” Veronica sounded defensive. “She gave it to us, remember?”

I tried to smile at my sister. “I’m not accusing you of anything. I’m just making sure that no one stole it.”

To Eric, I said, “Maybe her daughter would be able to tell you. Nothing jumps out at me.”

“I’m sure she was a nice woman,” said Eric, “but her shelves are so cluttered with stuff that it would be nearly impossible to tell if a piece were missing here or there.”

“I’m just guessing that she probably doesn’t dust those shelves constantly,” Veronica clarified. “You could tell if there were a spot that wasn’t dusty.”

“Eric”—I looked up into his lovely eyes—“I have a bad feeling that the missing item is The Florist. She posted about it on Facebook earlier today. In fact, we had an odd call from a Frederic van den Teuvel who . . . gave me the creeps. I didn’t know what to think of him. He was quite insistent about wanting to see the book.”

Eric shook his head like a wet dog. “Why do people blab on Facebook about valuables or vacations? It’s like sending an invitation to burglars. Not a good idea.”

“Do you think someone attacked her for the book?” Veronica asked.

It seemed obvious to me. “That makes perfect sense. Someone tore the book away from her and caused her to have a heart attack.”

“Not so fast, ladies,” Eric said in a kind tone. “Except for the paper, which could have torn because she fell, there’s no outward sign of an attack on her. We’ll know more after the medical examiner has a look. Of course, it’s worth noting that she had that piece of paper in her hand.” He cocked his head sympathetically and looked at me. “But the book could still be around here somewhere. This might just be a scrap of paper.”

A cluster of people arrived at that moment.

Eric said, “Sorry, ladies. I’m going to have to ask you to step outside so they can collect evidence.”

“Evidence of what?” asked Veronica.

“Evidence of what happened to Dolly.”

This post is sponsored by Kensington Publishing. Thank you for supporting our partners, who make it possible for Murder & Mayhem to continue publishing the mystery stories you love.