The Legend of Burro Joe

Was Burro Joe a brilliant scientist or a man on the run after murdering his wife? J. Michael Orenduff recalls his encounter with the mysterious recluse.

Burro Joe was a rustler. He went into hiding after murdering his wife. He was in the witness protection program. He was a genius scientist from the Manhattan Project who snapped after the first atomic bomb was detonated in New Mexico.

Those were the rumors rancher Alton East told my father. The only one East was sure about was the rustling. He’d found the remains of a calf at the foot of the Mogollon Mountains and was certain Burro Joe was the culprit since there wasn’t another human being within 50 miles of the remains.

East was a customer of my father who travelled through New Mexico selling salt blocks and mineral supplements to ranchers and feed stores. He took me with him when school was out and always made time for side trips to exotic locations such as White Sands and Carlsbad Caverns.

My favorite spot was Mogollon, a ghost town in the Gila Wilderness where my family had a cabin. The cool air at 7,000 feet was a welcome change from the desert heat in the 1950s before air conditioning. We didn’t own the land—we had a mining claim instead of a deed. My father said we had to work the claim to keep it. In retrospect, that was probably just a ruse to keep me out of trouble.

Mogollon wasn’t technically a ghost town. The 20 misfits who lived in the village enjoyed making me wide-eyed with stories of claim jumpers, dance hall girls, shoot-outs, and fortunes won and lost at the poker tables.

Six shooters, cattle rustling and violence seemed like something from the movies until I overheard Alton East telling my father about Burro Joe.

John and Inez Covington were friends of my parents who often spent time with us at the cabin. Which was convenient for me since their daughter Priscilla and I were both in the early throes of puberty.

After I met the mystery man of the Gila Wilderness, getting Prissy to kiss me fell to second place on my priority list.

On our next trip to the cabin, John brought his Jeep. The locals told us where Joe lived and added that he didn’t like company.

Which probably explained why John had a pistol on his belt. The trail to Burro Joe’s place didn’t qualify as a road, even by Gila Wilderness standards, and we finally reached a point where even the Jeep couldn’t continue.

And there he was. So still among the trees that we didn’t spot him at first.

Burro Joe was the most exciting thing I’d ever seen, man or beast. Even better than the black bears who rummaged through our garbage and the cougar who prowled our wooden porch in the middle of the night.

His rifle was leaning against a tree. His eyes were invisible behind glasses thicker than the bottoms of coke bottles. He was thin and wiry with unkempt dark hair, but he was freshly shaven and dressed in khaki pants and work shirt.

“Good Morning,” my father said to him. “We own a cabin on the south fork of Silver Creek. We heard there was someone living up here and decided we’d drop by to say hello. Hope you don’t mind.”

Joe’s head swiveled in jerks from one of us to the other.

His voice was unmodulated with no discernible accent. He picked up his rifle and started walking. We followed him to a cabin hidden in a defile between a mound of ash-flow tuff and a wall of igneous rock studded with glassy quartz.

A stream just large enough to support six-inch Gila trout gurgled along the base of the igneous wall, its façade showing a narrow cleft likely the result of ancient volcanic rumblings.

He pointed at me. “Only he can fit through.”

He waved me to follow. I jumped the stream and slid sideways through the crack. My mother started to say something, but I was in the cave before she could call me back.

After the first 10 feet, the walls began to show ice. Another 20 feet brought us to a small chamber tall enough to stand up in and wide enough to accommodate the headless carcass hanging on the left wall.

I stared at it.

Without the sun glancing off his glasses, I could see his eyes–dark, deep set and unexpectedly timid.

“More like two,” I said since it was clear the carcass was a calf.

“It’s his refrigerator!” I gushed as we exited, my mother visibly relieved to see me alive.

Related: A Medical Examiner and a Criminal Psychologist Solve a Series of Murders in New Orleans

He showed us a waterwheel he’d made, the creek spinning its paddles and generating enough electricity for a single light bulb in his ten by eight cabin cleverly pieced together using logs, partial sheets of plywood, galvanized tin and the hood from a 1950 Olds 88.

I began to think the mad scientist theory was correct. He had shelter, electricity, cold storage for meat, fresh fish and enough firewood to build a signal fire visible from Mars.

He said almost nothing until John asked him if the mines–they had Zane Grey names like the Last Chance and the Little Fannie–had closed because the gold had all been mined.

Joe stood a little straighter. “No. They barely scratched the surface. Those mines down in town were on a branch of the vein. You’re standing on the mother lode.”

We followed him upstream to another crack in the igneous wall. This one dropped straight down. My father shined his flashlight into the shaft. About 20 feet to a rock floor.

Joe looked at my mother. “If you could leave the boy with me, we could find a fortune down there. I need someone like him who can fit through that hole and is light enough that I can haul him out with a rope. A few days of looking is all we need.”

My mother had gone ashen. “Too dangerous,” she said.

He held up his rifle. “This? I just keep it around to shoot dear and scare off claim jumpers. I’m a peaceable fellow, ma’am. I wouldn’t let any harm come to the boy.”

She looked at Joe. “We’ll think about it.”

I nagged at her until I extracted a compromise. Next weekend we would go for a day-long picnic near Joe’s place. He could lower me down to look for gold, but only that one day. And with John and my dad around to haul me up if Burro Joe couldn’t or wouldn’t do so.

Related: When a Young Girl Goes Missing, A Father Questions If His Son is Guilty of a Terrible Crime

When we returned to Mogollon, the locals told us Burro Joe was in jail.

My mother said, “Poor man. He doesn’t have any friends or family. Let’s visit him. See if he needs anything.” She was always a kind person, but I think her motivation in this case was to bolster me up since I had missed out on the adventure of a lifetime.

We had no way of knowing the adventure had just begun.

Alton East had finally caught Joe in the act. The county seat, Reserve, has fewer than three hundred residents today, down from maybe four hundred when we went to see Joe in the one-room adobe jail.

I felt a rush when I saw the jail door open and both its bunks empty. What could be more thrilling to a 12-year-old than a jail break? But the truth turned out to be less exciting.

Joe was at the café down the street having lunch.

The jail had neither a food preparation area nor a bathroom. The sheriff–named Barney like the hapless deputy of Mayberry fame–didn’t want the hassle of delivering meals and unlocking the door every time a prisoner needed to get to the outhouse behind the jail. So he made arrangements for the prisoners to eat at the one café in town and left the door to the jail unlocked.

After my mother found some excuse to take the others down the street and leave me alone with Joe, he said, “There’s another prisoner.”

In addition to going to the outhouse and the café, prisoners could leave once a week to get a haircut.

“That should be easy,” I replied.

He shook his head. “The trick is to stay escaped. A man’s easy to track down in this open country. I’ve got to leave after dark and be in the mountains before sunup.” He lowered his voice. “I need a flashlight.”

Related: No Beast So Fierce: The Book That Got a Man Released from Prison

My mother had brought a bag of cookies for Joe but left them in the car when we saw the door to the jail open and Barney nowhere to be seen. I went to the car and transferred my father’s flashlight from the glove box to the cookie sack.

“Here’s your cookies,” I said theatrically as I handed him the bag. In retrospect, I suspect Sheriff Barney would have laughed at me, but I thought I was clever and daring.

“If you can get back to my cabin, follow the defile to the second cave. You’ll see a stand of aspens above it. Climb past those and you’ll see where I stay when unwanted company arrives.”

“I can’t get there by myself.”

“That’s okay. I don’t care if your parents bring you. But no one else.”

Some people thought Joe was scary. I think he was just driven. Gold crazy. The really scary guy was his cell mate with cold glassy eyes so far apart that he looked like a lizard.

As we headed home the next morning, we stopped at a roadblock manned by the second prisoner. He had a badge and a gun. He stared at me. He finally asked my father if we had seen anyone walking or hitchhiking. My father said we hadn’t. Lizard eyes told us to drive on.

I later learned that the second prisoner had seized the opportunity presented by Joe’s escape to steal a badge and gun from the sheriff’s office. The only reason I can think of for him to man a roadblock was that he was going to use the badge and gun to commandeer a car. Maybe he passed on our car because there were two men who might overpower him and also a boy who knew who he was.

When Alton East heard that Joe had escaped, he left Catron County never to return. I continued to hear rumors about Joe from the locals but never saw him again.

Over half a century after visiting Joe in jail, I did a book signing in Silver City. Then I headed up New Mexico State Road 78 to see if I could find his cabin. The road is one lane with no guard rail. After the second or third switchback, I used one of the turnouts provided for passing to turn the car around.

The 12-year-old kid who climbed every peak around Mogollon and was anxious to be lowered into a cave has been replaced by an old man who’s afraid of heights. It doesn’t bother me. Going back could only tarnish the memory.

J. Michael Orenduff grew up in a house so close to the Rio Grande that he could Frisbee a tortilla into Mexico from his backyard. After a life in higher education, Orenduff took to write his award-winning Pot Thief murder mysteries, which combine archaeology and philosophy with humor and mystery. His most recent entry in the series is The Pot Thief Who Studied Edward Abbey.

The Pot Thief Who Studied Pythagoras 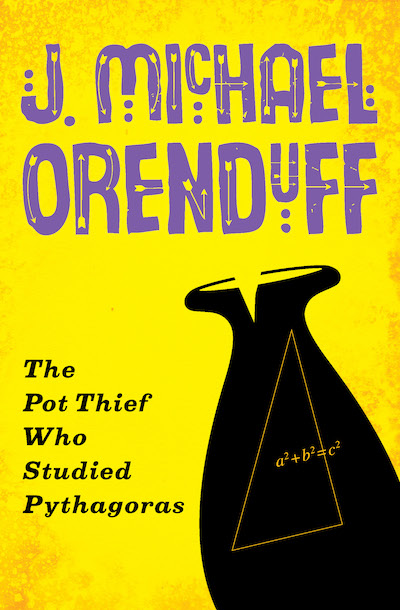 The Pot Thief Who Studied Ptolemy 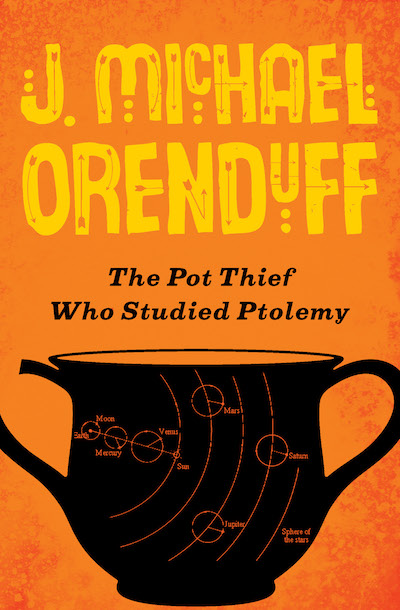 The Pot Thief Who Studied Einstein 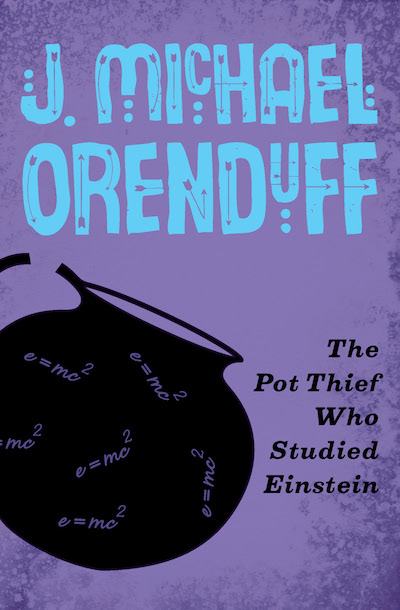 The Pot Thief Who Studied Escoffier 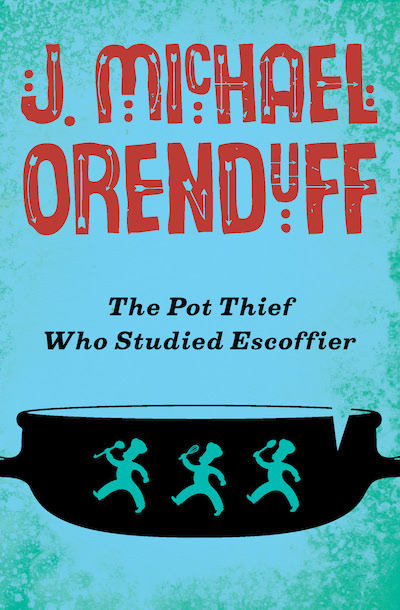 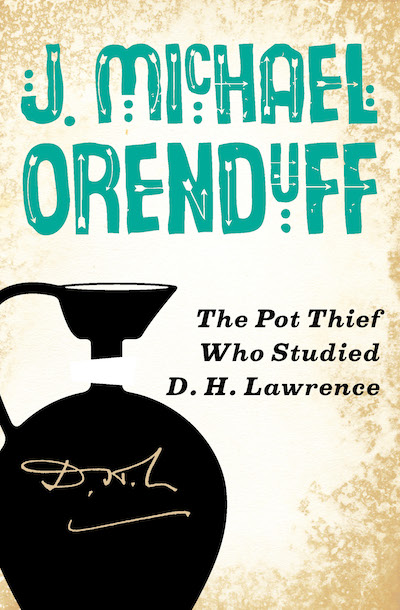 The Pot Thief Who Studied Billy the Kid 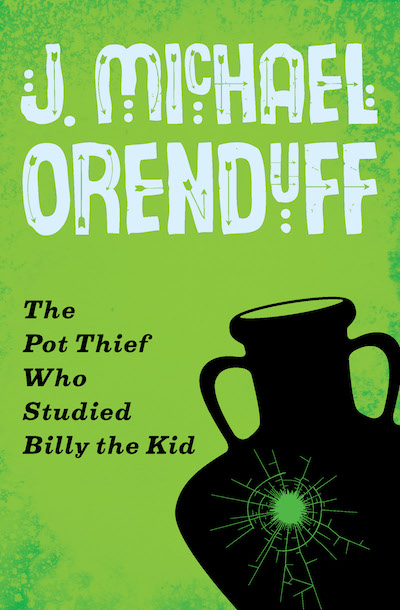 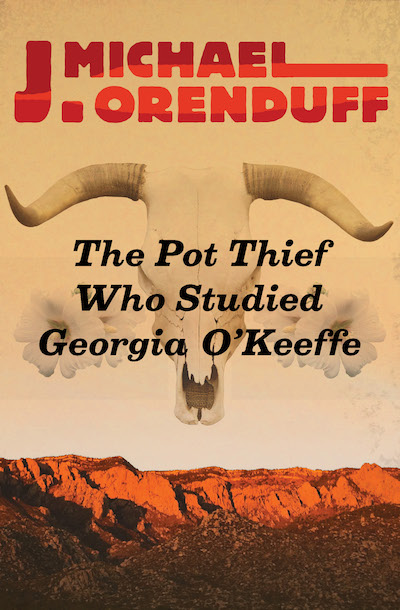 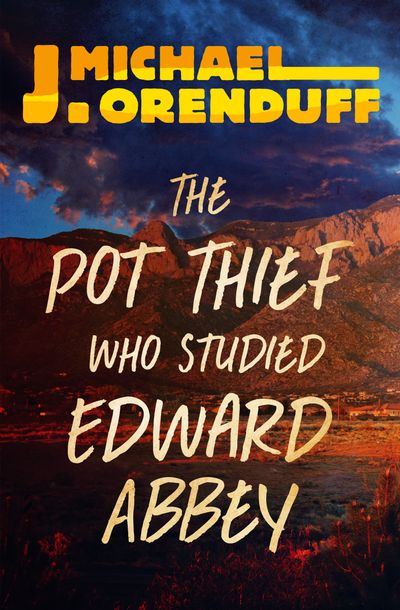